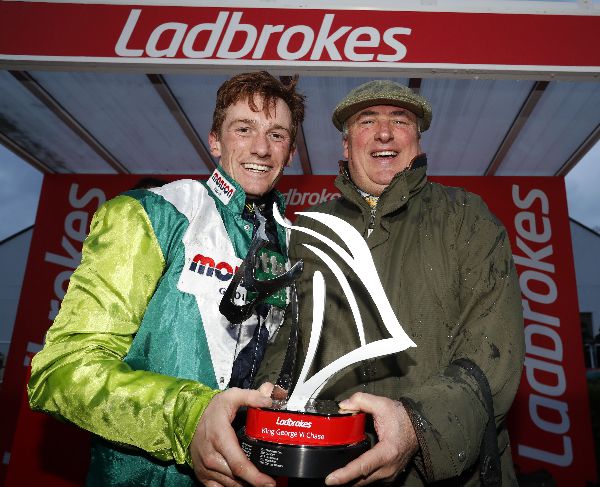 Although only five runners went to post for the traditional Christmas feature, the race did not lack intrigue, with the defending champion Clan Des Obeaux taken on by his top-class stablemate Cyrname, Betfair Chase hero Lostintranslation, Irish raider Footpad and outsider Aso.

Having inflicted a first career defeat over jumps on Altior at Ascot last month, Cyrname was the well-backed 5-4 favourite, with Harry Cobden siding with him over Clan Des Obeaux.

After initially taking a lead from Aso, Cyrname adopted his customary prominent position at the head of affairs with over a circuit to go — and was still just about in front rounding the home turn.

However, 11-2 chance Clan Des Obeaux was travelling the better of the pair in the hands of Sam Twiston-Davies and pulled right away between the final two fences, winging the last to score by 21 lengths.

Cyrname boxed on to finish second and provide the champion trainer with a one-two, ahead of Footpad in third.

The big disappointment was the Colin Tizzard-trained Lostintranslation, who seemed to be struggling to keep tabs early on and was ultimately pulled up by Robbie Power, having briefly looked like he might play a part at one stage.

Nicholls said: “I’ve always said he’s a better horse this year, as he’s a year older and stronger. If he keeps going forward it could put him in the Gold Cup picture.

“It was a tough call for Harry (which horse to ride), I couldn’t really advise him what to do, it was a tough one.”

He added: “We’ve got to for 12 now, haven’t we? There’s no reason why both horses won’t be back next year. I just love winning the good races — preparing the horses for the big days is what I really enjoy more than anything now.