Crystal Ocean on top in the Prince of Wales's 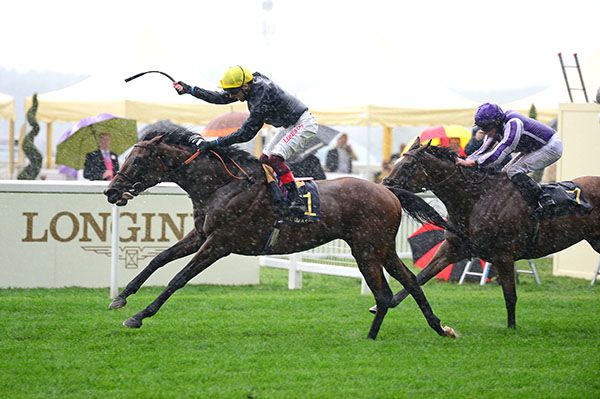 Crystal Ocean graduated to Group One class as he lifted the Prince of Wales’s Stakes at Royal Ascot.

Trained by Sir Michael Stoute, Crystal Ocean had finished second at the highest level twice last term, but he finally came good as he outbattled Aidan O’Brien’s Magical in the 10-furlong showpiece, which was run in pouring rain.

Given a masterful ride by Frankie Dettori, Crystal Ocean (3-1) raced on the heels of pace-setter Hunting Horn until the race began in earnest turning for home.

Dettori committed early and moved out to the middle of the track as 13-8 favourite Magical struggled to go with him, before he just started to drift back to the far rail.

Ryan Moore switched Magical to the inside for a second run, but Crystal Ocean was not for passing and Dettori stood up in his irons before the line, coming home a length-and-a-quarter winner.

Andre Fabre’s Waldgeist made up late ground to take third, while the William Haggas-trained Sea Of Class was fifth of the eight runners on her seasonal bow, having run despite concerns over the rain-softened conditions.

Stoute — enhancing his record as the all-time leading trainer at the Royal meeting with his 80th success — said: “It was great team work. Several people ride him work, including Ted Durcan.

“He’s been very consistent. If you look at his record, it’s quite amazing. It’s great for the (Southcourt) stud to have a Group One horse.

“I thought he ran very well in the Champion Stakes last year. He ran better than I thought.

Dettori said: “He stayed well. I kicked on the final turn, he responded well and kept on going. I got very little kickback as I was in the first two. The rain’s on top of the ground, but it’s not very pleasant out there. I stayed wide for the fresh ground.

“I was worried about the ground, as his best form is on firm, but he’s very tough.

“This horse is a heavyweight of the sport. He never runs a bad race.”

O’Brien said of Magical: “She ran very well. I’m very happy with the filly and she ran well. She might come back for the King George or maybe the Eclipse.”

Fabre said: “It was a good run and he might come back for the King George. I was not concerned about the ground, as he has won on soft ground before.”

Sea Of Class was ridden by James Doyle, who said: “She clearly disliked really deep ground like it is out there today. Trying to take the positives, the filly felt great and she travelled really well, we were just a bit too far back.

“The main thing is it was nice to get a run in and start her off.”