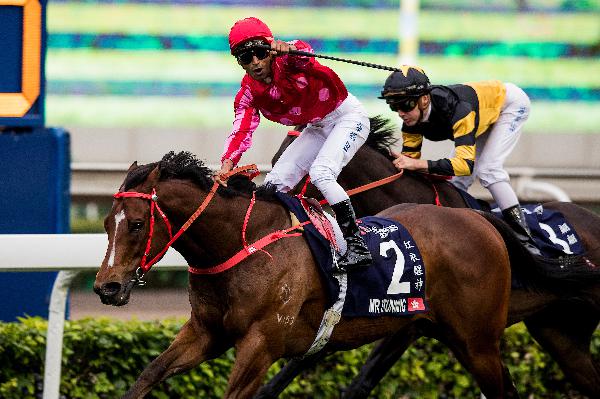 Mr Stunning has never held the official title of Hong Kong’s champion sprinter, yet when December rolls around he is a champion in every sense of the word. And if successful in Sunday’s (8 December) G1 LONGINES Hong Kong Sprint (1200m), he will have scaled a peak that no other horse before him has reached.

Silent Witness, Sacred Kingdom, Lord Kanaloa, Falvelon and Aerovelocity are all racing household names in these parts, if not the world over. All are two-time winners of Hong Kong’s premier sprint contest but none has won the race on three occasions – this is the current scenario presented to Mr Stunning.

The Exceed And Excel seven-year-old with HK$48,536,100 in career earnings will rewrite 21 years of history if he wins a third consecutive Hong Kong Sprint, and if his previous December form is any reference, he should be at his blistering best.

“His preparation and everything we wanted leading into the Sprint was right. When the big day came he was just the best horse on the day and that was the most impressive thing for me - to get him ready to go and win a race like that.”

Mr Stunning is Hong Kong’s ‘December Warrior’. He has raced three times in the year’s final month in three straight seasons for three wins, two at Group 1 level, and he’s looking to uphold that record despite returning from adversity this time.

The speedster was 1.9 favourite for his 2017 win under Nash Rawiller. Last year, he was second-favourite behind stablemate Hot King Prawn.

That was down to two defeats in his build-up, unlike the previous year when his victory over then stablemate D B Pin rolled off wins in the G2 Premier Bowl and G2 Jockey Club Sprint.

That was then though, back when he was trained by John Size. A stable switch to Size’s former assistant Frankie Lor preceded his second Sprint success.

Mr Stunning’s life began on 17 October, 2012 in rural Victoria, Australia, at Yallambee Stud, nestled in the picturesque Macedon Ranges. He was bred by Makybe Stud, maintained by Tony Santic, a tuna fisherman who rose to prominence as the owner of three-time Melbourne Cup-winning mare, Makybe Diva.

The bay was sold at the 2013 Inglis Great Southern Weanling Sale for AUD$110,000 to Lyndhurst Farm, who then drafted him to be re-sold at the 2014 New Zealand Bloodstock Premier Yearling Sale, where he fetched NZ$250,000 from Magnus Equine. &nbsp;

After Australia and New Zealand, the gelding arrived in Hong Kong as a three-year-old in 2015 and enjoyed immediate success, winning three out of his first four starts in the first quarter of 2016 under the care of Size, the now 11-time Hong Kong champion trainer.

“He was typical of a good horse - he just does nothing wrong, he showed his ability the first day we trialled him - he ran an outstanding time for 800 (metres) down the straight at his first day out in public and he presented as an outstanding prospect,” Size says.

“He has a very good temperament; he’s easy to ride in a race, which most of the good horses are, and he helps himself a lot on race day.”

Mr Stunning made his debut at Happy Valley on 3 February, 2016 with Teetan in the plate.

“I normally have a host of Class 4 horses and from memory I thought he was quick enough to go to Happy Valley at his first start,” Size recalls.

And quick enough he was: the Exceed And Excel gelding displayed an electrifying turn-of-foot to successfully accomplish what many a good horse cannot - win on debut in Hong Kong.

Beauty Generation, Ambitious Dragon and Aerovelocity are just a few who never managed a first-up score.

“I was the first guy to ride Mr Stunning in his debut at Happy Valley and when they win like that you know already that they will go higher in the ratings.

We always thought highly of him even before he started racing - he always showed us that he was talented,” Teetan says.

Natural ability and versatility have been keys to Mr Stunning’s achievements.

&nbsp;“His racing manner is a big asset for him: simply, he can be ridden anywhere - his first win he was a long way off the lead, so that tells you he’s quite versatile,” Size says.

“When he goes to the races and if he draws a good gate, it means you can make a plan for him and he’ll comply - whatever the jock wants to do the horse will do and that obviously leaves him with energy to complete the race.”

“He had a good first season - he won three times in his first three starts and in his third season for me he won the Hong Kong Sprint,” the handler says.

“He then ran second at his next three starts and in each of them he was beaten by one of my horses but he was always the one to beat and the most consistent of mine.”

Those three runner-up efforts came behind D B Pin in the G1 Centenary Sprint Cup, Beat The Clock in the G2 Sprint Cup and Ivictory in the G1 Chairman’s Sprint Prize.

Mr Stunning finished outside of the top three only three times from 19 starts for Size, adding further merit to his already impressive record. His unplaced efforts came when he was either first-up or at the end of his campaign.

Mr Stunning maintained his consistency when he was transferred to the Frankie Lor stable for the 2018/19 season, his sole win that term was the G1 Hong Kong Sprint but his four other efforts resulted in four placings.

Injury struck though, a right humerus stress fracture wiped out the back-end of last season, forcing a patient Lor to give him four months to recuperate and delaying his return this campaign.

“He came out of his first-up run fine; it was his first run this season and from gate 12 so it was a pleasing performance,” Lor said.

For Mr Stunning though, a shot at history beckons this Sunday and while it will be Lor’s name in the race programme, credit to his champion galloper should also be shared with Size, Lor’s former mentor, who played a pivotal role in the horse’s development from his Hong Kong debut to the first of his two G1 LONGINES Hong Kong Sprint victories.

Bowman will be on board for the second time and Lor is positive yet circumspect about his star sprinter’s chances of a hat-trick.

“He’s only getting older, I hope he can run a good race - it would be quite special,” he says. “I hope he gets a good draw for the race.”

History awaits Mr Stunning this Sunday but win, lose or draw he has earned his place as one of Hong Kong’s finest sprinters and a worthy warrior.ut this season he’s so much stronger.”

Purton has ridden Exultant to every one of his eight wins in Hong Kong going back almost two years and is well-placed to judge the bay’s progression.

“He’s developed as he’s gone,” he said. “He had no speed in his races at all early on in his time here, and now, especially in the last six months, he’s starting to show more gate speed and he’s giving himself more of a chance.”

Purton’s words are perhaps ominous for his rivals but maybe not as disconcerting as Cruz’s bullish assertion.

“This is his prime, at age five, he’s better now than he was last time, he’s a stronger horse coming into the race this year, he’s a serious horse,” the handler said.

Purton echoed the sentiment, but with a note of caution.

“He’s going terrific,” he said. “His last win was very good, I just hope that hasn't flattened him for this race, it’s a strong field, it’s never an easy race for us but he’s going to be in with a chance.

“Tony has big plans for him this season and that can take things out of a horse. He’s going to need to manage him well. He’s managed him perfectly so far and Tony knows what it takes to train these good horses. I have a lot of confidence in him and the way he’s going to present the horse and his plans - I’m excited for the season ahead.”

As for the question of who will be top dog on the Hong Kong scene when Sunday’s sun sets, Purton is not losing faith in his other star galloper’s ability to bounce back and become only the second triple winner of the LONGINES Hong Kong Mile.

“I hope he can do it,” he said. “This year there are a few question marks over Beauty Generation but he hasn't been getting beat far, he’s had little excuses and if things pan out well for him we hope he can do it again.”

And if both horses should win and continue to thrive, the talk is that Purton could enjoy the thrill of riding Hong Kong’s two biggest stars at Meydan’s Dubai World Cup meeting in March. But first, there’s the most important business of deciding supremacy and defending home pride at the ‘Turf World Championships’.