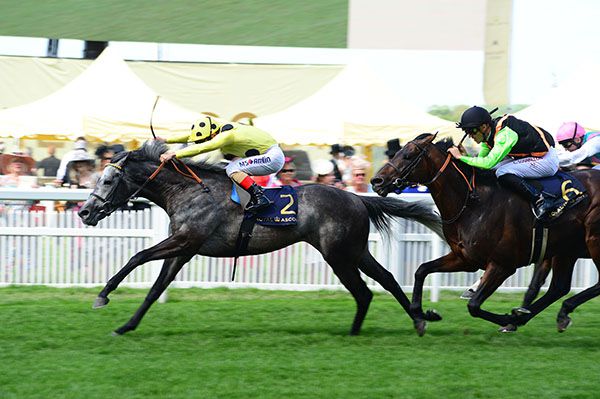 Defoe followed up his Coronation Cup triumph of three weeks ago with a hard-fought victory in the Hardwicke Stakes at Royal Ascot.

A quality field of eight runners went to post for the Group Two contest and there was real drama right from the off, with last year’s Derby hero Masar — making his first appearance since his Epsom success — stumbling badly after coming out of the stalls and impeding the Czech raider Nagano Gold.

Defoe raced in midfield for much of the mile-and-a-half journey, but was being ridden along by Andrea Atzeni rounding the home turn, at which stage the strong-travelling Mirage Dancer looked set to provide Sir Michael Stoute with a 12th Hardwicke success.

However, Roger Varian’s grey, the 11-4 favourite, really found his stride in the straight and after hitting the front over a furlong out, he found enough for pressure to prevail by half a length.

Nagano Gold ran a tremendous race to fill the runner-up spot following his early setback, which virtually brought him to a standstill, with Mirage Dancer just a length away in third.

Masar was not disgraced on his long-awaited return, travelling well for much of the way before weakening out of contention from the furlong pole to finish fifth.

Varian said: “I thought it was a strong race on paper, and he took his form from Epsom forward, which was nice.

“He is just a lovely horse. He is very straightforward, tries and relaxes and is getting better with age. He is a joy to train. I thought he was very capable of mixing it with the best and the horse is warming to the season nicely.

“Hopefully we can bring him back in one piece for the King George. It is up to other people to have their opinion, but I have my opinion of the horse which is very high, and he is backing that up with his performances.

“We are excited for the rest of the season.”

Nagano Gold’s rider, Christophe Soumillon, said: “Unfortunately Masar gave us a hard time at the start. Hopefully everyone is OK, but it cost me the race.”

Thomas Janada, racing manager for Vaclav Luka Jnr, owner-trainer of Nagano Gold, said: “We are happy, but it was quite close and Christophe said he had a problem at the start with Masar who crossed him and also in the straight.

“It’s great and I think it will help racing in the Czech Republic. Even people who are not interested in racing so often will watch this race so I think it’s great for racing.

“We have entered him for a German Group One race in August, but we could change it and come back here for the King George.

“The long-term plan for this season is the Arc de Triomphe, so we don’t want may races for him. I think he will run only once between now and the Arc.”

Masar’s trainer Charlie Appleby said: “I’m delighted to see him back. We had a little bit of a mishap with a bit of a stumble out of the gates and therefore it didn’t materialise quite how we wanted it to.

“We would have liked to have been placed a bit further forward. James (Doyle) was rather forced into a situation there. They have gone a sensible gallop, but as you saw he was a bit fresh and over-raced in the first quarter of the race.

“Once he was travelling well into it I was pleased how he came into the straight and James said he just got a little bit tired in the last half a furlong.

“As much as you want to do at home, there is no better thing than match fitness and he has got that match fitness now. Let’s hope he comes out of the race fit and well.

“Without speaking to His Highness (Sheikh Mohammed) yet, I’d imagine something potentially like the Juddmonte International, as I wouldn’t mind coming back in trip.

“For me he has still got plenty of boot there.”