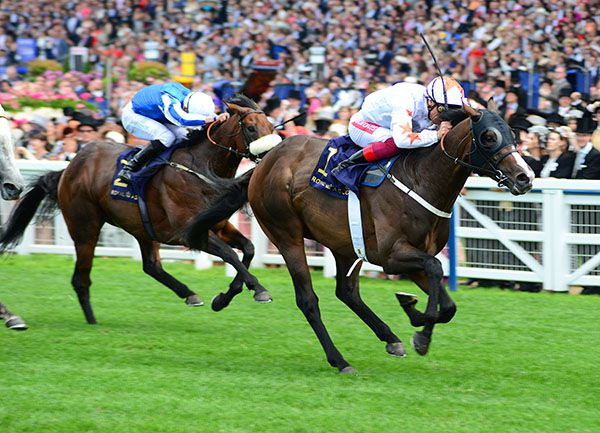 Advertise got his career back on track with a brilliant victory in the Commonwealth Cup at Royal Ascot.

Martyn Meade’s colt was one of the star performers in the juvenile division last season — winning three of his five starts and finishing second in the Coventry Stakes and in the Dewhurst.

However, he never threatened to land a telling blow on his return to action in last month’s 2000 Guineas at Newmarket and as a result, blinkers were fitted for the first time as he dropped back to six furlongs for this Group One contest.

With man of the moment Frankie Dettori in the saddle, Advertise raced in midfield for much of the way before hitting the front racing inside the final furlong.

The one to get closest to the Phoenix Thoroughbreds-owned Advertise was Forever In My Dreams — who was bought by the Phoenix Ladies Syndicate at Monday’s Goffs sale for 430,000 pounds.

In the end, though, the former was a comfortable winner by a length and a half.

The Kevin Ryan-trained Hello Youmzain was a head away in third, with Aidan O’Brien’s even-money favourite Ten Sovereigns a shade disappointing in fourth.

Meade said: “I think we have to put the Guineas behind us. He wasn’t quite right on that day, clearly, and we wanted to see if he got the mile, but we never found out as he never ran any sort of race.

“I thought we would go back where we he is now over six furlongs, where he was pretty special last year. I trained him for a mile, getting him switched off, and I suddenly thought, ‘how do I jazz him up again?’ — so we put the blinds on and luckily that did the job today.

“He jumped and clearly that demonstrates that is his distance. If we can step him up a little bit we clearly will.

“It was just lucky that Frankie was able to ride him as that made a huge difference.

“I think that (sprinting) is clearly his area, but I would maybe like to go to France for the six-and-a-half-furlong race there (Maurice de Gheest) and maybe he ought to go for the Foret later on. You can’t write off the mile, but I don’t think it is for him.

“The July Cup is not out the question and he is in it, but the Maurice de Gheest is quite an attractive proposition.”

Dettori, equalling his best ever total of Royal Ascot winners in a week with seven, said: “I’m so pleased for Martyn as he has been having a tough time.

“He ran a stinker in the Guineas and he decided to close his stable for a month as he knew his horses weren’t right and it paid dividends.

“We were hoping and we weren’t so sure if we were out of the woods, but he put in a tremendous performance there. I was always in control. He travelled like the winner and when I kicked he went.

Aidan Fogarty said of second-placed Forever In Dreams: “It’s a great result for Phoenix with the first and second.

“Con (Marnane) bred her. She won twice in France for Matthieu Palussiere and she came over here and was only beaten less than two lengths in the Queen Mary.

Amer Abdulaziz Salman, chief executive of Phoenix Thoroughbreds, said: “To finish first and second in a Group One at Ascot is amazing. I’m more excited about the ladies finishing second, I think — the filly has given us a fright as the boys.

“We know the horse wasn’t himself in the Guineas and he had a bit of an issue. We were not sure whether to run him or not, but we took the risk — we are gamblers as well.

“Coming here we were sure the horse was fit and ready to run. The trainer was happy. The last piece of work he done he breezed well.

“He is champion and a Group One winner in the past. He is a stallion in the making and is by a good stallion as well. If you look at him and his confirmation he is a very beautiful horse in the ring.

“He will definitely be a future stallion for Phoenix.”

“I think it’s possible he’ll go for Group One races like the Haydock Sprint and maybe something in France. He’s better on soft ground. He just wants taking care of.

“Next year I think he’ll be mature and be a very good horse.”

Despite defeat, O’Brien was upbeat on the run of Ten Sovereigns, saying: “Delighted with his run. First time back at six (furlongs) since running in the 2000 Guineas.

“I think we’ll keep him at six. We’ll see how he is. The July Cup is one of the races we’ll be thinking of.”