Dettori to ride at Killarney 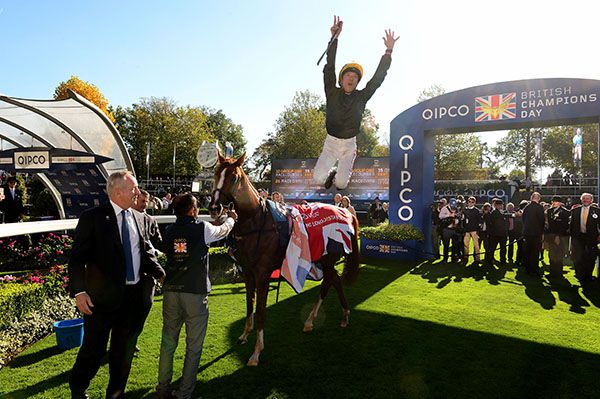 Frankie Dettori is confirmed to ride at Killarney racecourse next Wednesday July 17, the third day of their five-day July Festival. This will be the first time the Italian jockey has ridden at the County Kerry racecourse.

The 48-year-old Italian-born, British-based jockey who is known for his distinctive ‘flying dismounts’ is one of racing’s most successful jockeys and recognised sports people. He has won all the major Flat races around the world including multiple group and classic races in Ireland.

Frankie is having a fantastic Flat season in Britain. He was crowned leading rider at the recent Royal Ascot meeting with a tally of seven winners. He also rode the dual Prix de l'Arc de Triomphe heroine Enable to win the Group 1 Coral Eclipse at Sandown Park last Saturday.

The five-day festival at Killarney runs from Monday July 15 to Friday July 19 and among the winners at the corresponding fixture 12 months ago was recent Epsom Derby hero Anthony Van Dyck. The 2017 Epsom Derby winner Wings Of Eagles is another Killarney graduate, he landed his maiden success at the course in August 2016.

Philip O’Brien, Racing Manager at Killarney Racecourse said: “We are absolutely thrilled to have Frankie ride at Killarney racecourse on Wednesday. He is a household name who transcends the confines of racing and we are delighted that racegoers will get the chance to see such a racing legend in the flesh. It will definitely be the highlight of our July Festival and we are looking forward to a few of his famous flying dismounts in County Kerry.”