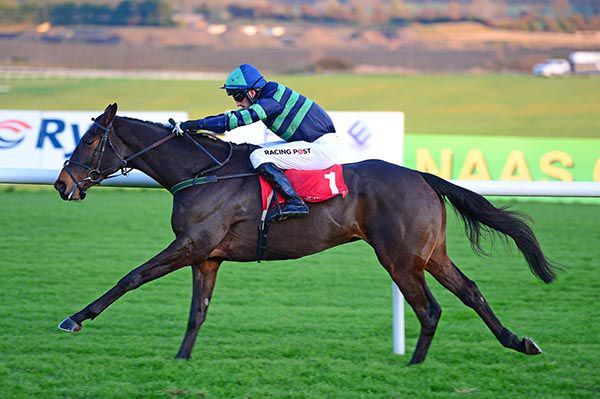 Patrick Mullins made the journey from Mallow (second on Colreevy in Cork’s 12.50) to Punchestown a worthwhile one as he took the Gray Construction (Pro-Am) INH Flat Race on Dewcup (2/1 in the morning, returned 4/1).

There were plenty fancied for what looked a warm event of its type, but the confidently-ridden winner closed travelling well off the home bend and quickened away for a four length win from Fantasio D’Alene (11/4).

The 5/2 favourite Slige Dala was another length and three quarters back in third place.

The winner had really good bumper form last term, winning on his second start at Thurles from two subsequent winners, and finishing an excellent fourth under Ruby Walsh in the Grade Two bumper at the Aintree Grand National meeting.

It was a second winner of the afternoon for owner Michael Ryan, both this fellow and Sacchoandvanzetti being by his home-bred stallion Finsceal Fior.

“I always thought he was a smart horse, said winning trainer Ted Walsh.

"He won at Thurles and then ran well in Liverpool but probably shouldn’t have gone there as it was less than two weeks after.

“He did it nicely today. Michael (Ryan, owner/breeder) has the sire, who is by Galileo out of Finsceal Beo and is also the sire of Sacchoandvanzetti. The mare, Elyaadi, was also useful so he’s bred to be a good horse.

“He is going to jump and is a good leaper but he could go next for a winners’ bumper at Navan if the ground didn’t get too soft.

“Any Second Now will run in the Paddy Power with top-weight.”