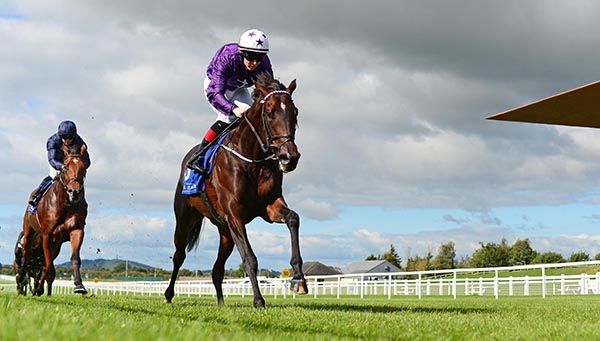 The son of Time Test was a winner on debut at the latter track in June, finishing two and a quarter-lengths ahead of Ballydoyle's Auguste Rodin.

The latter horse has gone on to win twice since, notably taking a Group 2 at Leopardstown on Irish Champions Weekend.

Crypto Force, having been bought by Kia Joorabchian of Amo Racing, then went from his debut to Royal Ascot, where he finished seventh in the Chesham.

His return to the Curragh for the Beresford at the weekend was his first outing since that run, and under Colin Keane he displayed his true potential when winning in good style.

"He won his maiden very impressively and beat Auguste Rodin that day, then he went to the London sale and Kia bought him for 900,000 pounds on my recommendation," O'Callaghan said of the colt.

"Ascot just came too soon for him, he's had plenty of time as we put him away until the autumn and he won very well the other day.

"Colin Keane said that he thought he'd have won even easier on better ground, but he's a good horse and he handles that ground fine.

"He said he took plenty of pulling up after the line as well, and he’s the pace for a mile but will get further next year."

The Vertem Futurity Trophy at Doncaster over a mile on October 22nd could be next up provided the going does not prove to be too testing.

"We'll be weather watching for Doncaster, it can often come up very soft there and if it was heavy ground we’d pull up stumps for the year," said O’Callaghan.

"He’ll either go to Doncaster if the ground is OK and if it isn’t we’ll put him away for next year.

"He looks like he's going to be better going further, he's a very good pedigree and those horses tend to progress from two to three.

"He's that type that has taken a bit of time this year and the fact that he saw the mile out well last time hopefully bodes well for the future."