Dublin Racing Festival next up for Latest Exhibition 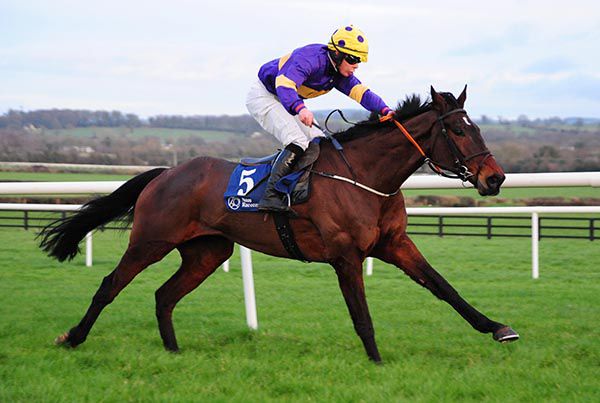 Latest Exhibition is bound for the Dublin Racing Festival after lowering the colours of the highly-regarded Andy Dufresne at Navan.

The Gordon Elliott-trained Andy Dufresne was a long odds-on favourite for the Grade Two Navan Novice Hurdle, but had to play second fiddle behind Paul Nolan's Latest Exhibition - who deserves extra credit for recovering from a serious mistake at the sixth flight.

The six-year-old had previously chased home Abacadabras over two miles in the For Auction Novice Hurdle - and after he relished the step up to two and a half, Nolan is looking forward to testing the water over another two furlongs at Leopardstown in early February.

"He's very good, and we're very happy with how he came out of the race," said the Enniscorthy-based trainer.

"After the mistake he made, you'd worry he might have pulled some muscles in his back or something like that - but the vet checked him over, and he's 100 per cent thankfully."

Nolan is wary of taking the high-class form at face value, with the well-touted beaten favourite performing below market expectations.

"It remains to be seen whether Andy Dufresne was at his best on the day or not," he added.

"We hoped our horse would run well, but we didn’t expect to beat him.

"That’s the way it goes, but I thought our horse was very tough to come back after the mistake he made.

"All going well, we'll aim for the two-mile-six-furlong Grade One in Leopardstown - that's the next target.

"He's a good horse, and I hope we can keep him in one piece and he'll go on and enjoy a good career."