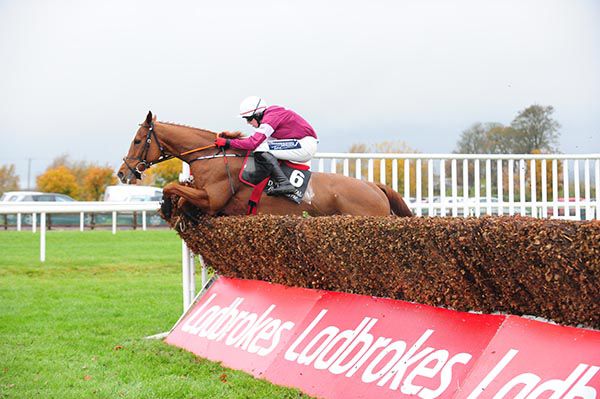 All eyes will be on Apple’s Jade as she goes for four-in-a-row in Sunday’s BARONERACING.COM Hatton’s Grace Hurdle, but the Cullentra House team can only be hopeful that the brilliant daughter of Saddler Maker will return to her best.

“We were disappointed with her run (in the Lismullen Hurdle) at Navan but in fairness she has competed at the top end for the last four years and it’s hard to keep going,” reasoned Elliott.

He added: “She’s in good form and I think she has improved from the last day but she’s going to have to as this is a hot race. It’s probably the hottest renewal of this race for the last four or five years.

“Willie (Mullins) has an army of horses in it and Honeysuckle of Henry’s (de Bromhead) plus a few others are in it.”

After a hugely under-whelming winter 2018 campaign, redemption would be complete if Samcro could land the Grade One BARONERACING.COM Drinmore Novice Chase.

“I wasn’t surprised by Samcro’s performance at Down Royal as his work had been very good,” said Elliott.

“We couldn’t get him to scope right all last year but this year he has been very good and Shane McCann who rides him in all his work is very happy with him. We are looking forward to running him on Sunday.”

Destined to be a chaser really, after a point-to-point win for Colin Bowe at Monksgrange in 2016, Samco attempts to prove as much, with a second win from as many starts over racecourse fences, in the weekend’s two and a half mile novice chasing highlight.