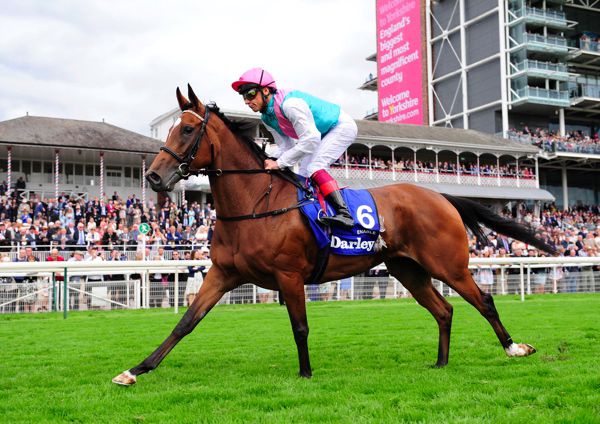 Enable dug deep into her reserves of brilliance to fight off Crystal Ocean and become only the third dual winner of the King George VI And Queen Elizabeth Qipco Stakes.

Sent off the 8-15 favourite for the Ascot showpiece, the John Gosden-trained mare — who was first successful in the 2017 renewal — found herself trapped wider than ideal through the early stages under Frankie Dettori, as Norway cut out the running.

After Derby hero Anthony Van Dyck became the first of the big guns to drop away, Crystal Ocean and Enable swung into the straight full of running — with Dettori calling on Enable for her effort at the two-furlong marker.

Crystal Ocean and James Doyle refused to buckle, though, and the prize looked very much up for grabs before Enable and Dettori got the last word for a neck success, in a finish that had definite echoes of the epic Grundy-Bustino battle of 1975.

Waldgeist was third for France, another length and a quarter away.

Gosden said: “She’s everything you ever want. The draw rather affected her, she was suddenly very wide, so Frankie dropped back further than he wanted.

“She’s a brave and wonderful filly, and what a great battle with Crystal Ocean.

“It’s what you wanted to see.”

He went on: “I think she possibly carried him (Dettori) into the race a little too easily, and I thought he’d hit the front a long way out, but he felt he had to go then.

“Crystal Ocean showed all the courage in the world, and the first two are wonderful — they put up a great King George.

“Frankie was slightly hands and heels and waving it (whip) at her, he didn’t really throw everything at her at all. He just felt he wanted her to do it slightly within herself.

All roads for the Khalid Abdullah-owned winner — who was emulating Dahlia and Swain in winning a second King George — lead to a Prix de l’Arc de Triomphe hat-trick bid in October, and Gosden will give further consideration to how she gets there.

He said: “We’ll let he come along in the next days and make a decision where we go with her. She is slightly pencilled in to go to York, she’s in the Yorkshire Oaks and the Juddmonte International.

“That’s still a nice six weeks off the Arc.”

Revelling in the latest big-race success of a season that has been extraordinary even by his standards, Dettori said: “I’m carrying the pressure of the nation. She is unbeaten for two years.

“Not only is she a super mare, she showed what a courageous will to win she has. I don’t want too many races like that, as I’m absolutely exhausted.

“In all my career it is probably the hardest and most hard-fought race I’ve ever had. It was two great champions. Give credit to Crystal Ocean, he put it out there for me and it was an amazing race.

“From the outset I knew Crystal Ocean was the one to beat, as he is very strong here. Boudot (Pierre-Charles, on Waldgeist) had the spot I wanted, so I had to make a three-wide move round the turn and James was sitting quite good.

“I jumped on him and just put my head in front and I thought I would see it out, but in fairness he served it up to me and we had a really titanic battle, and I was always having the edge, like in the Breeders’ Cup with Magical.

“We are on the road to Longchamp now.”

Sir Michael Stoute said of the gallant Crystal Ocean: “He made it an entertaining day for the crowd. He doesn’t know how to give in. He is just so brave and gives everything.

Doyle said: “I’ve never experienced finishing second in a race and getting as loud a cheer as the winner. They really do love him and he wears his heart on his sleeve. What a run. It was a great race, it was unbelievable.

“She joined me and it felt like I headed her back — well I thought I did — and I thought we could be in business, but she just digs into the reserves and away she goes.

“Credit to my fellow, he left every inch of his heart out on the track there.”