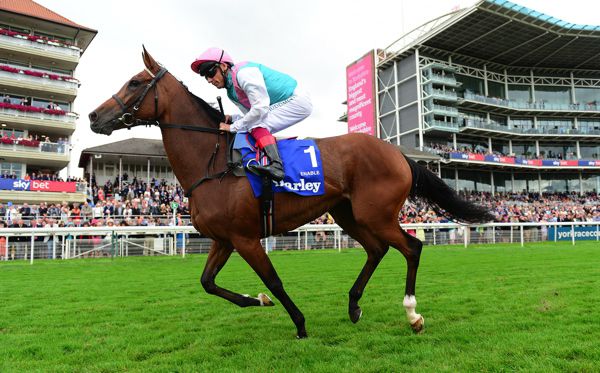 Enable pleased connections as she worked over a mile at Newmarket on Wednesday morning.

The five-year-old is set to bid for an unprecedented third victory in the Prix de l’Arc de Triomphe at ParisLongchamp on October 6 and trainer John Gosden opted for a workout on the Rowley Mile as part of her preparations.

Regular partner Frankie Dettori was on board as Enable galloped with Crossed Baton, with the mare just nosing slightly in front at the end of the spin.

Teddy Grimthorpe, racing manager to owner Khalid Abdullah, was also on hand to watch the gallop and he was satisfied with the efforts of the 10-times Group One winner.

He said: “It was a good, solid piece of work and just what everyone seemed to want to see. Frankie Dettori was happy with her.

“She was led by Crossed Baton and she pulled up easy with him.

“Her preparations have been straightforward, we’ve had no issues and she’s been in good form.”

Enable has only been beaten once in 14 career starts and she heads to France having won her last 12 outings, triumphing in the Yorkshire Oaks on her most recent run at York last month.

The Nathaniel mare has also won the Eclipse and King George VI And Queen Elizabeth Stakes this season, claiming the latter event in an epic finish with the now-retired Crystal Ocean at Ascot.