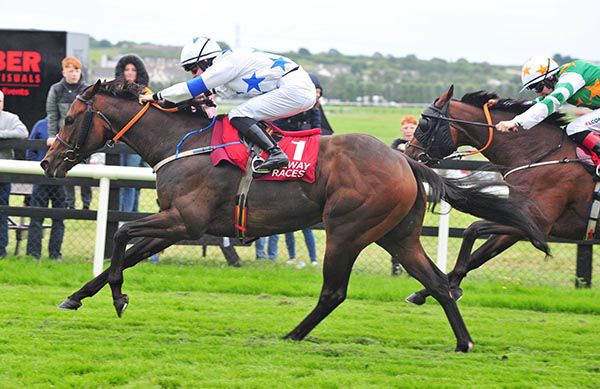 Dual Galway Festival winner Make A Challenge may bid for a quick hat-trick at the Curragh.

Denis Hogan is considering a drop in trip for the four-year-old on Friday, in the hope of getting him up the weights in time for Irish Champions Weekend.

“He’s an improver — he’s gone up to 88 since Galway and he’s been entered in a six-furlong handicap at the Curragh on Friday,” said the County Tipperary trainer.

“There’s a chance he could go there. I wouldn’t mind trying to get him in on Champions Weekend, and I think he’d need to be 90-plus, so he might come back a furlong this weekend.”

Hogan hopes the speedier test will not significantly inconvenience the in-form gelding.

He added: “Seven furlongs is probably his trip, but I think he has enough boot for six. He’s an exciting horse.

“He had issues with the stalls earlier in the season — and I thought we wouldn’t get him in at one stage, because he was acting up a lot.

“But thanks to the stalls handlers and my team at home, he’s done plenty of work and is good as gold now.”