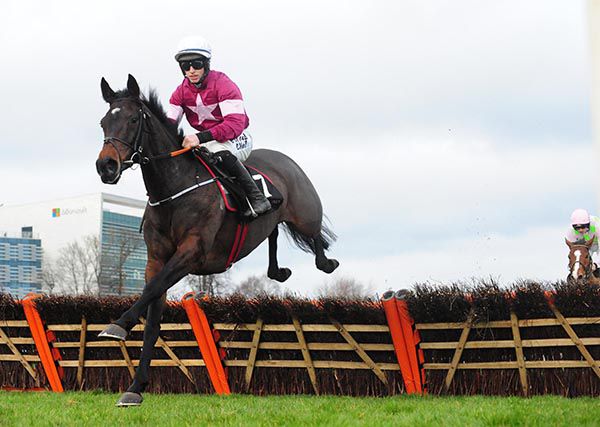 Barry Geraghty rates Apple’s Jade the main obstacle to his mount Buveur D’Air’s bid for a third successive Champion Hurdle after the mare’s demolition of her rivals in the Irish equivalent at Leopardstown.

Apple’s Jade’s owner Michael O’Leary is now leaning towards a crack at the big one with the Gordon Elliott-trained seven-year-old — having previously preferred another bid for the OLBG Mares’ Hurdle.

The doubt in some people’s minds had been whether Apple’s Jade would be as effective back at two miles after more than two years running over longer distances.

But she put paid to that in no uncertain manner with a 16-length victory over Supasundae on Saturday.

“I have to say I was impressed with Apple’s Jade at Leopardstown on Saturday,” Geraghty told his blog on attheraces.com.

“Plenty of people, myself included, thought she would be vulnerable back over two miles on better ground — but she proved that to be very wrong and produced a great performance.

“What really caught my eye was how slick her jumping was down the back. She now looks to be the biggest rival for Buveur D’Air, and it is a serious race in prospect.”

Buveur D’Air came through his prep run for Cheltenham with flying colours as he took the Contenders Hurdle at Sandown for the third year running, just 25 minutes after Apple’s Jade had strutted her stuff in Ireland.

Geraghty added: “Using that race as a prep race has worked in each of the last two years, and I’m sure Nicky (Henderson, trainer) will be very happy where he has him right now.

“We’ll be counting down the days to the Champion Hurdle.”