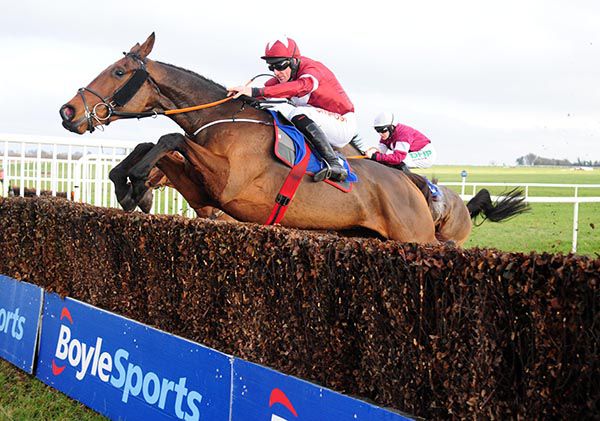 The owner is seeking an incredible ninth success in the race since 2008 and the only two contenders not to wear the famous maroon and white silks are Willie Mullins' Some Neck and the Jessica Harrington-trained Jett.

With top-class chasers Don Cossack and Road To Respect on the roll of honour, this contest has been used as a springboard to the top level and Noel Meade, who trains Road To Respect, runs Tout Est Permis this year.

He won the Troytown and a Grade Two at Thurles last season before his run of success ended when he was eighth in the Irish National.

"Tout Est Permis is in good form and is just ready to start," said Meade.

"We are meeting Balko Des Flos particularly wrong at the weights, but it is a Grade Three conditions race and an ideal starting point for him. The ground is fine, but I don’t think he is a horse that would mind it a bit softer either."

The Henry de Bromhead-trained Balko Des Flos, without a win since the 2018 Ryanair, Alpha Des Obeaux and Dounikos, both representing Gordon Elliott, complete the field.

"Alpha Des Obeaux is in good form and is ready to start out for the season. He had the option of the Munster National last weekend, but we've decided to wait for Punchestown, which looks a nice starting point for his season," said Elliott.

"Like a lot of ours, he is going to come on for the run and it is his first run since February, so he'll improve plenty and he won’t have any problem with the ground if it does ease over the next few days.

"This has been a lucky race for us, Dounikos is going well and looks ready to start off.

"He can run well fresh and this looks a good race to start him out in rather than asking him to carry top weight in a big handicap for his first run of the season.

"On his day he is a very smart horse and he was very good when winning the National Trial here at Punchestown last season."

Mullins' Cool Colonnade will attempt to fend off Jan Maat and Swordsman, as well as Daly Tiger.

Meade said: "Daly Tiger has come out of Tipperary well and with just three other runners, this looked a nice place to go next for him. We’ll see where we go from here, but he is a nice horse and has schooled well at home."