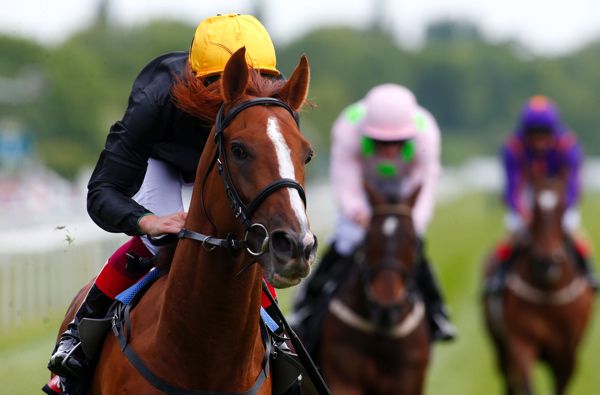 John Gosden fears soft ground for Stradivarius' repeat bid in the Gold Cup at Royal Ascot - because it will blunt his "phenomenal" turn of foot.

Last year's winner arrives on a six-race winning streak, with his last defeat coming on Champions Day 2017 behind Order Of St George.

He showed his versatility on his return to action this season when coping with the drop to a mile and three-quarters - but every dry hour will aid the chance of Frankie Dettori’s mount, according to his trainer.

Gosden said: "He has that great weapon for a two-and-a-half miler in that he has a phenomenal turn of foot. If it goes soft it blunts his turn of foot and leaves him vulnerable.

"To a degree I share the view he is becoming a people's favourite. He is in the Cup races, and people enjoy them, and he was the champion stayer last year.

"If it rains a lot he is up against it. It won't be his scene if it turns into a slog on softer ground, because he has got a lot of class, and that will favour the boys who have got to grind it out.

"I think Torcedor and the Aga Khan’s horse (Vazirabad) last year set a very high standard. I don’t see the standard being any higher (this time) - he was just very effective on good to firm ground last year. He is not a big horse but he has the ability in the last two furlongs to turn it on.

"He got boxed in on Champions Day, but Frankie saw that chink of light and away he went and — yes he did cross Thomas Hobson late on, as has been pointed out - but all is fair in love and war, (and) yes he did get away with the ground that day.

"If the ground goes on the soft side Thomas Hobson is the horse I fear the most."

Dettori feels Stradivarius is now building up a real following.

"He breaks all the rules of a stayers' mould in that he is small and compact, and not tall and leggy as you would expect, but he has got that weapon of a turn of foot," said the Italian.

"He has become the people’s favourite horse. Last year he won the Gold Cup, and we are trying to defend the title again.

"The great thing about him is that he wears his heart on the sleeve and he never goes down without a fight — and people appreciate that."

With 500,000 pounds on offer, the race forms part of the Qipco British Champions Series — and Stradivarius will have two new, worthy rivals in the shape of Dee Ex Bee, who ran with credit in the Derby and St Leger last year, and Melbourne Cup winner Cross Counter.

Mark Johnston, who last won the Gold Cup with the second of Royal Rebel's wins in 2002, and his third in all after Double Trigger in 1995, admits it is the race he targets above all others.

"He’s had two races, and they were exactly the two races I wanted," said Johnston.

"The Gold Cup is going to be a lot tougher - of course it is. But the Sagaro and Henry II, to my mind, are the two recognised trials - and he's won them both. From those races, the one indication we got was the further the better. We are relishing the extra half mile, not concerned about it.

"Double Trigger was very much the classical stayer — he was 16.2 (hands) and tall and lean. Dee Ex Bee is far thicker-set and heavier, but on form and pedigree he’s got all the credentials.

"We said all along that a horse who has run second in the Derby and fourth in the St Leger is your ideal candidate for Cup races as a four-year-old. He’s been what we have been dreaming of for many years and he’s all we imagined he would be."

For Charlie Appleby, the hope is Cross Counter can replicate his overseas form and handle the step up in trip.

He said: "He’s a horse that has done well from three to four, and I don’t think he’s plateaued out.

"What he's done over two miles, you cannot fault him. Stepping up in trip again, you don’t know, but if he improves for it then it opens up even more possibilities."

"Capri has been slow to come to hand, but I’ve trained him for this race all year. We’ve been happy with him since his last run," said O’Brien.

"While they obviously have to have stamina, they won’t win it if they don’t have class - and Capri won an Irish Derby, so hopefully he does."

Last year’s Chester Cup winner Magic Circle will be looking to build on his comeback third in the Ormonde Stakes at Chester.

"He will appreciate any cut in the ground," said trainer Ian Williams.

"With the exception of one (Thomas Hobson, who is nine), he’s the old man of the gang, and his form with Aidan’s horse (Kew Gardens) at Chester looks solid enough over a trip that was inadequate for him.

"We are happy with him, and it’s great to have a runner in the race. It doesn’t look like Australia has left a mark on him. I couldn’t have been happier with him at Chester, and the trip is certainly no disadvantage for him."