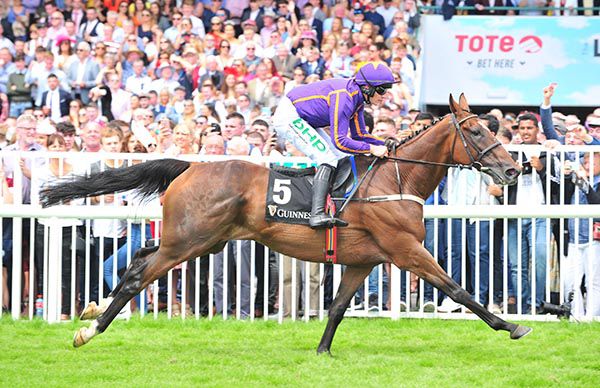 His stable companion Robin De Carlow (suffered no more than an overreach thankfully) was pulled up and dismounted after the first, but the Willie Mullins yard still brought up a Galway double with Wicklow Brave (evens) in the Grade Three Guinness Open Gate Brewery Novice Chase.

Mullins’ first winner, Dandy Mag was ridden by David Mullins, but it was stable jockey Paul Townend that took the reins on Wicklow Brave, and he made all.

There was never much worry for the many supporters of the tremendous ten-year-old, victorious on his chase debut at Ballinrobe 65 days earlier.

He asserted away in the straight to account for Jan Maat by six lengths.

“He’s a character and you couldn’t but like him,” said Townend.

“He’s the horse of a lifetime and he’s after bringing his connections all over the world.”

For his part Willie Mullins reflected: "He is unique and has won bumpers, flat, hurdles and chases and Nick (Peacock, owner) said he'd love to win a Grade 1 chase so the obvious thing is to go for the Drinmore Chase at Fairyhouse in early December with him.

"He was very slick over his fences today and Paul said he has a lot more respect for fences than hurdles; at one or two of the fences he said if they were hurdles he would have landed in the middle of them.

"He is so versatile and is himself at home; we only do what Wicklow wants to do and he is so laid-back. We have got used to him and he has got used to us at this stage but I don't think anyone queues up to ride him out in the morning! He is getting more unique as he grows older.

"I don't know if any horse has done it before but we'd like win a Group 1 on the flat, over hurdles and now over fences - if any horse has, it was a long, long time ago."

The Irish Horseracing Regulatory Board Veterinary Officer examined Robin De Carlow (GB), trained by W.P. Mullins, at the request of the Stewards and reported the animal to be have an overreach post race.

At the request of the Stewards, D.J. Mullins, rider of Robin De Carlow (GB), trained by W.P. Mullins, reported to the Stewards' Secretaries that his mount was pulled up after jumping the first fence as she was felt to have lost her action and was noted on dismounting to have sustained an overreach.