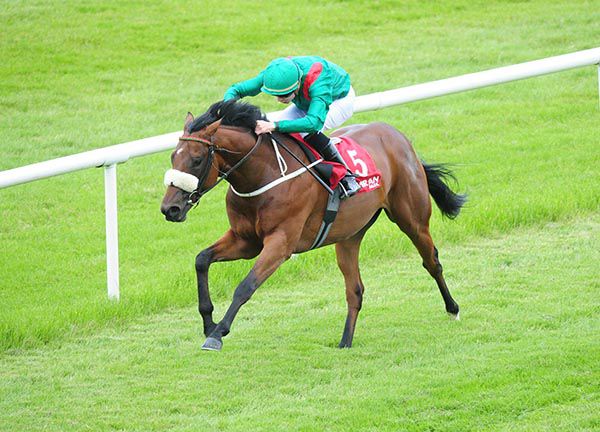 Mick Halford is looking forward to seeing Zarzyni step up in class for the Japan Racing Association Tyros Stakes at Leopardstown on Thursday.

Owned and bred by the Aga Khan, the Siyouni colt created a huge impression when making a winning debut at Gowran Park last month and Halford is confident his youngster has progressed ahead of this Group Three assignment.

“He’s in great form and we’ve been waiting for this race since his first run,” said the Doneaney-based trainer.

“We hoped he’d run well in Gowran, but he surprised us a small bit that he was ready enough to win. That is always a good sign and he does seem to have come forward in his homework.

“It looks a smart race, even though it’s a small field. We’ll have a better idea of where we stand afterwards, that’s for sure.”

Zarzyni faces just four rivals, with Aidan O’Brien saddling Armory and Toronto in his bid to claim this prize for a 13th time.

Both Armory and Toronto appear major contenders after winning on their second starts at the Curragh and Leopardstown respectively.

The Ger Lyons-trained Justifier beat Armory into third when making a winning debut over this course and distance, and renews rivalry.

The field is completed by Willie McCreery’s filly Innervisions, who was third on her Curragh debut four weeks ago.