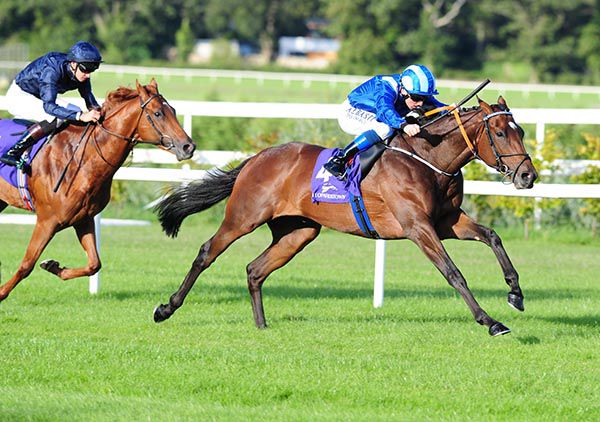 Chris Hayes admits it is a “dream come true” to be heading to Epsom with a realistic chance of winning the Investec Derby on Madhmoon.

The former champion apprentice will be having his first ride in the blue riband Classic on Kevin Prendergast’s colt, who finished fourth in the 2000 Guineas at Newmarket.

Hayes would love nothing more than to provide his octogenarian boss with a first win in the race on Saturday, given it is one of the few missing on his illustrious record.

“It’s a dream come true to have my first ride, and he looks to have a real good chance,” said Hayes.

“The form is adding up. Skardu ran well in the Irish Guineas, and we were a head behind him at Newmarket.

“He’s improved — whether he’ll stay a mile and a half is debatable, but it looked like in the Guineas he wanted to step up in trip.

“We really liked him last year, and he was very impressive in his first start and was even more impressive against quality opposition next time — beating Broome comprehensively.

“His juvenile form is adding up, and his two runs this year are adding up, so he looks like an improving horse.”

Given it will be his first ride in the Derby, Hayes will tap the knowledge of a couple of his former weighing-room pals beforehand.

“I’ll seek advice from Pat Smullen and Michael Kinane — they are the lads I always go to — but you can’t make any plans until you see where you are drawn,” he added.

“One thing he won’t be short of is pace — so wherever I am advised to be, he should have the tactical pace to be there.

“It will be a fun flight home if we won. I’ve been with the boss since I started — he’s got me this far in my career, so it would be nice to cap it off with something like this.

“He’s been a mentor to me — we have a very good relationship. We have had cross words, but that is understandable when you’ve been together as long as we have. We have huge faith in each other.”