Henderson aiming at Punchestown with Raffles 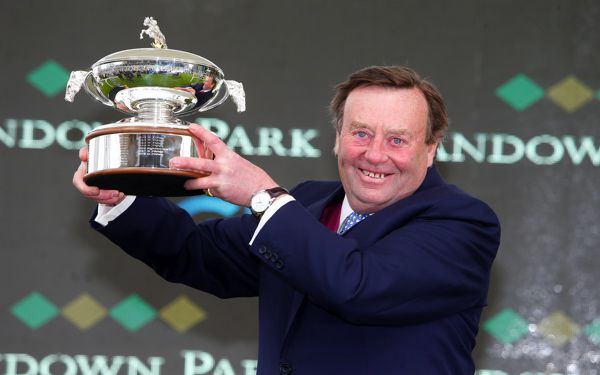 Fusil Raffles is on course to finally have a crack at Grade One company in the AES Champion Four Year Old Hurdle at the Punchestown Festival.

The juvenile made quite a splash when winning the Adonis at Kempton by nine lengths on his British debut in February, but he cut his hind leg in the course of that victory and had to bypass both Cheltenham and Aintree.

However, trainer Nicky Henderson reports his charge to be back on track now and in the frame to emulate the handler’s previous winners of the race — Katarino, Punjabi and Grandouet.

He said: “We had to mend that hind leg of Fusil Raffles’ after he got a horrible cut when he won the Adonis Hurdle, but that has gone very well and he did his first bit of fast work last week so we are on schedule.

“We love Punchestown and have for a long time. We have Champagne Platinum in the Herald Champion Novice Hurdle on Tuesday so it looks like we’ll be staying for the week again!”

Willie Mullins has won the last six renewals of the two-mile contest and has four of the 17 entries this time, while Gordon Elliott also has four, headlined by Triumph Hurdle second Coeur Sublime.

He said: “Coeur Sublime will run in the Champion Four Year Old Hurdle. That race has been his aim since the Triumph and it was good to see his form franked at Aintree last week.”

The Annie Power (Mares) Champion Hurdle is the other Grade One feature on the final day of the Festival on May 4.

The Elliott-trained Apple’s Jade is entered in that contest, although she holds other engagements at Punchestown, along with Mullins’ Laurina and Benie Des Dieux, who looked set for glory at Cheltenham only to fall at the last.