Hermine much too strong for bumper rivals 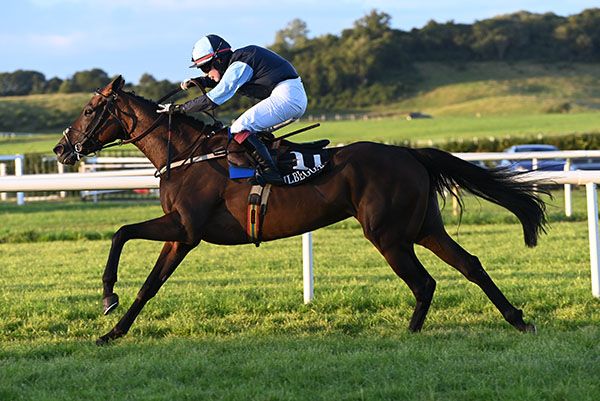 Hermine may have been the perceived outsider of the two Willie Mullins runners in the finale but the daughter of Authorized ran out a convincing winner of the Follow Kilbeggan Races On Instagram INH Flat Race at Kilbeggan.

Sent off second favourite, behind stablemate Leitrim Park the five-year-old was soon at the head of affairs under jockey Jody Townend.

On the run out of the back straight, Patrick Mullins loomed up behind the eventual winner on Leitrim Park but the champion amateur was soon pushing along, as Townend quickend clear from the front. Wisteria Bloom and Skip Mahler emerged from out of the chasing pack but had no answer to the easy nine length winner.

Jody Townend said; “She was very good. She's just an out-and-out galloper and I couldn't pull her up, she went right down to the second hurdle down the back.

“She was green and she will come on from it. She was having a fair old look in front which was actually good because she settled for me, she can be quite free.

“She definitely has a bit of a future anyway. She doesn't know when to stop galloping.”

The Model Kingdom cruises home on first crack at hurdling

The Model Kingdom made a winning transition to flights in the opening mares' maiden hurdle at Tipperary at long odds-on.

The reckless actions of Christophe Soumillon in a race at Saint-Cloud on Friday caused consternation. A ban of 60 days imposed on Soumillon by the local stewards for intentionally elbowing Rossa Ryan, causing the Irish rider to take a terrible fall, is viewed by most as far too lenient and I have to agree.

Morrison thinks Quickthorn may have been over the top

Hughie Morrison says it is “unlikely” that Quickthorn will line up in the Qipco British Champions Long Distance Cup after being tailed off behind Kyprios at ParisLongchamp on Saturday.