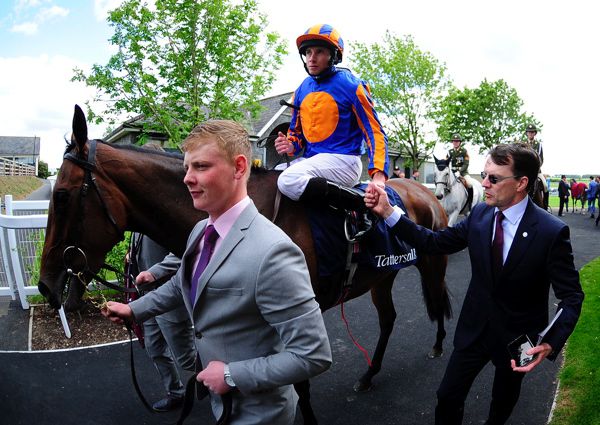 Aiden O’Brien expects the return to a mile in the Coolmore Fastnet Rock Matron Stakes on Saturday week to revive the fortunes of English and Irish 1000 Guineas heroine Hermosa.

The daughter of Galileo will revert back to the trip for the first time since finding only Watch Me too strong in the Coronation Stakes at Royal Ascot.

Despite Hermosa failing to beat a rival home when stepped up to a mile and a quarter last time out in the Nassau Stakes at Goodwood, O’Brien believes a line can be put through that effort.

O’Brien said: “Hermosa is going to go back to a mile for the Matron at Leopardstown.

“Goodwood was a bit of a funny race and Frankie (Dettori) was riding a mile-and-a-half horse (Mehdaayih) and they went quick.

“We probably didn’t learn a lot at Goodwood with the pace and the track. It was a bit of a non-event really. If you don’t act at Goodwood it can all go out of the window very quick.”

Kew Gardens will bid to give O’Brien a third straight success in the Comer Group International Irish St Leger at the Curragh on Sunday week when making his first start since finishing second in the Coronation Cup at Epsom in June.

O’Brien said: “Kew Gardens is in good form and is going to start in the Irish St Leger. He went a little bit wrong on us so we had to stop with him. He is back in good shape and is ready to start.

“He stays very well and he gets a good trip. We were looking forward to the Gold Cup this year as we thought he was a made Gold Cup horse.

“I would think he would get further than two miles and I don’t know if he would be quick enough for the Melbourne Cup.”

Having claimed Group Two glory in the Futurity Stakes, Armory will step up to the top table for the first time at the County Kildare track when taking on unbeaten Vintage Stakes winner Pinatubo in the Goffs Vincent O’Brien National Stakes.

O’Brien said: “Armory is in good shape and he is going to the National Stakes. We look forward to all those races. It is good for everybody.

“Nobody wants to see easy races they all want to see the good horses clash. You win some and lose some. You learn if you have to improve or if you are good enough.”

A step up in class is on the cards for Mogul, who is a full-brother to dual Group One-winning stablemate Japan, with O’Brien earmarking the Group Two KPMG Champions Juvenile Stakes at Leopardstown as his next target.

He said: “Mogul could go to Champions Weekend. There is a mile Group Two race there. If he doesn’t go there he could go to the Beresford.

“His brother Japan didn’t go to a Group One at two. We want to think of next year with him.

“We’ve always liked him and he has done everything nice. He had a lovely first run and progressed well to his second run.”