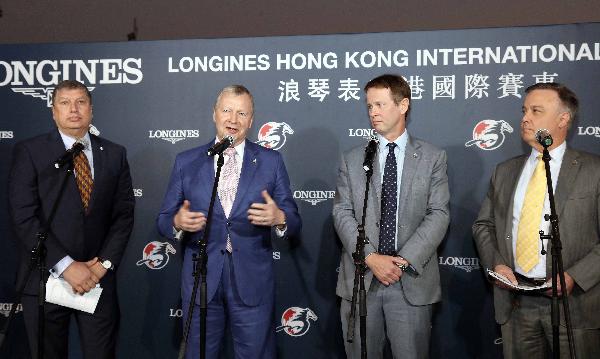 Mr. Winfried Engelbrecht-Bresges, the Hong Kong Jockey Club’s Chief Executive Officer said: “The outcome of today’s races shows that it was a fantastic international race meeting. Our Irish friends missed out on a little bit of luck in the Cup but really it was a day for our Japanese friends. They have supported us with a lot of horses coming for this meeting.

“The quality and the excitement we have seen shows what Hong Kong racing is all about. It’s about world class sport and that is what makes us a unique value proposition.”

Turnover was a record for the meeting at HK$1.71 billion.

“We are more than delighted about the turnover. We could not have expected turnover like we had today,” Mr. Engelbrecht-Bresges said.

“The interesting part is that the local turnover, even though we had to close down some of our Off-Course Betting Branches, was above last year at HK$1.376 billion. The major growth seen today came from commingling turnover, which has been amazing. This shows that our strategy of globalistion, of making Hong Kong racing — with our integrity, with all the excitement, with the deep liquidity in our pool — available to the world, is working.

“The commingling turnover was HK$334 million, which is up by nearly 30% from HK$258 million last year.

“But today was not about the turnover,” he noted, “it was about the sport and also how it showed the resilience of Hong Kong racing, and the excellence of the Hong Kong Jockey Club. It is a day to celebrate because despite a lot of challenges we have staged something that I don't think many organisations in the world could have done.”

The afternoon’s event went ahead at a difficult time for Hong Kong, and, with a major protest planned and taking place on Hong Kong Island at the same time as the races, a crowd of 27,965 was well down on the usual figure.

Mr. Engelbrecht-Bresges said: “We deliberately were not pushing our attendance. We wanted to be absolutely sure that everybody who came to the races would be able to go home safely because we knew there was a big demonstration on the island and we didn't want to take a risk. We had a lot of in-depth planning for this meeting.

“For us to be able to stage this international event when all other major sporting events here have been cancelled, we have demonstrated that we manage what we do extremely professionally, with a real risk assessment.”

Mr. Engelbrecht-Bresges thanked the Club’s staff, the media in attendance and particularly the international horsemen who demonstrated their faith in the Hong Kong Jockey Club.

He said: “Thanks firstly to our outstanding people here in Hong Kong and second of all the international connections who have put their trust in us and have brought some of the best horses in the world to compete and put on a race meeting of real excellence.

“I thank the media for trusting us and coming here, and our colleagues and the media here in Hong Kong who have covered the race meeting exceptionally well. I thank all of you.” Caspar Fownes-trained Rise High ran a big race under Vincent Ho and proved the best of the home defence, finishing a short-head and half a length behind two genuine international Group 1 performers.

Ho said: “He had a perfect position and travelled very nicely but Win Bright and Magic Wand were too good for him today. It was a good run and I think he will come back stronger.”

It was a performance which suggested big days ahead but, with Hatakeyama planning a third trip to Sha Tin for Win Bright next April, pretenders to the throne know exactly what will be required.lant in defeat,” said Moore. “In his last two runs he hasn't been hitting the line as we'd expect. That's what Zac said and he confirmed that.

“He's just not going through the gears when he gets into the straight and he did it again today. The Stewards’ Cup will be his next Group 1 race and we'll take it race by race from there.”

There were no hard feelings from Moreira, who had another afternoon to cherish at the circuit. Having beaten Beauty Generation in the Jockey Club Mile, Waikuku confirmed places here from the widest gate 10.

“It was an extremely good run, he had to face a tough gate and I had to drag him back,” said the rider.

“He wasn’t having much luck from there but he’s a good second to a good horse. We didn't have too much luck from the gate and I think that is what has got him beaten. That's the reason why I pulled him back otherwise I was going to get tracked wide.”

At a ‘Turf World Championships’ that belonged to Japan, the last word should go to Soumillon.

“They are training horses on tough tracks, they are feeding them really well, trying many kinds of things and it pays off. They won the Melbourne Cup, Hong Kong, Dubai, nearly everywhere. It’s a great achievement and I’m proud to be part of it.”squo;s books of mares and the value of his offspring. But given his imposing brilliance, Japan’s industry players always expected the champion galloper to succeed as a stallion, particularly as he offered a blend of speed to some quality but stout stock.

“We surely believed that Lord Kanaloa would be a success in Japan,” Kaneko says. “There are many middle and long-distance Sunday Silence mares now, so suitable sprinter stallions are desirable.

“Also, the JRA has a lot of two-year-old races under 1600 metres in the summertime and this is very important. That is why we are not surprised by his success and that he is going very well now.”

In those coming-of-age years for Hong Kong’s majors, when the winners also featured the outstanding mares Ouija Board and Alexander Goldrun, the only winning horse to then make a noticeable splash as a stallion was Stay Gold, Japan’s 2001 Hong Kong Vase winner. The son of the breed-shaping Sunday Silence has sired 856 winners in his homeland from 1,256 starters, including the outstanding if mercurial champion Orfevre.

Also among Stay Gold’s 10 individual G1 scorers is Indy Champ, who, like Maurice before him, heads into this year’s LONGINES Hong Kong Mile with wins in Japan’s ‘big two’ mile races, the Yasuda Kinen and the Mile Championship.

Things have changed in the past decade, and the now regular presence of Japan’s stars, male and female, is some evidence that Hong Kong’s standout races do now hold some gravitas in the ‘stallion-making’ stakes. And perhaps the European perception is shifting too.

High prize money is of course key to drawing top-class contenders from out of their home jurisdictions, and the byproduct of that is that over time those quality runners might lift the prestige of a contest to the point where more horses of stallion potential are likely to compete.

In the past, Hong Kong’s year-end majors have perhaps fallen victim of an ‘after the Lord Mayor’s Show’ syndrome. Some European connections might have viewed them as a bit of an afterthought; after all, you wouldn't send a Derby winner to race in Hong Kong.

Well, not until now, anyway. The appearance of Anthony Van Dyck in Sunday’s G1 LONGINES Hong Kong Vase is some evidence that views perhaps are changing. Aidan O’Brien’s charge will become the first ever Epsom Derby winner to line up at the event.

He is by the all-conquering Galileo and, interestingly in a now increasingly cosmopolitan breeding world, from an Australian mare Believe'n'succeed. Just three months after Anthony Van Dyck won the Derby, his half-sister Bounding made her own headlines with her first foal selling for US$4.1 million at Keeneland’s September Yearling Sale.

If Maurice and Lord Kanaloa can build on positive early signs, the notion of Hong Kong’s big races as stallion-makers could become more than an ambition.

“Winning not only in Japan but also in other countries is very valuable. Their wins were not the exception, and they were very strong wins, and that made Lord Kanaloa and Maurice valuable as stallions,” Kaneko says.

And let’s not forget Akeed Mofeed in all of this: the BMW Hong Kong Derby and Hong Kong Cup victor was a rare colt in the Sha Tin stable block.

He now stands at Swettenham Stud in Australia with a 2019 fee of AU$16,500 and this year his fortunes have taken an upturn. He already has his first progeny in training at his old stomping ground, raising the prospect of his offspring perhaps one day striding out at the LONGINES Hong Kong International Races.