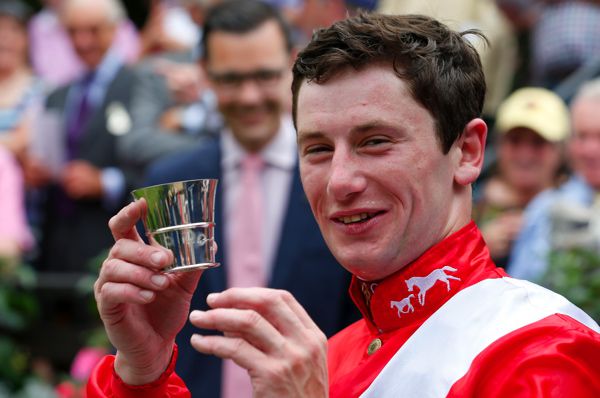 Kameko raced into the history books with an impressive success in the Vertem Futurity Trophy at Newcastle.

Originally due to be the centrepiece of last Saturday’s abandoned fixture at Doncaster, the Group One event was swiftly rescheduled to be run at Gosforth Park — making it the first ever top-level contest staged on the all-weather in Britain.

A high-class field of 11 juveniles went to post, with Aidan O’Brien fielding a five-strong team in a bid to match the late Sir Henry Cecil’s record of 10 victories in the race.

The heavily-backed favourite was Ralph Beckett’s runaway Newmarket scorer Kinross — but in the end none of them could land a glove on Andrew Balding’s dominant winner.

Since making a winning debut at Sandown in July, the son of Kitten’s Joy had been touched off by the Clive Cox-trained Positive in the Solario Stakes and O’Brien’s Royal Dornoch in the Royal Lodge.

Sent off at 11-2 for his latest assignment, Kameko travelled strongly in midfield in the hands of newly-crowned champion jockey Oisin Murphy before rocketing three and a quarter lengths clear.

Innisfree fared best of the O’Brien quintet in second, with his stablemate Year Of The Tiger pipping the apparent Ballydoyle first string Mogul to third.

Balding told Sky Sports Racing: “I hate criticising jockeys, but I think if Oisin had ridden the Royal Lodge again he would have won that and we’d have come here expecting him to win.

“I was very relieved when they decided to run it here, rather than wait until later in the year on the grass. All thanks to the sponsors and to ARC (Arena Racing Company) and the BHA (British Horseracing Authority) for getting it on.

“I think it was a proper horse race today and he is a very good horse.”

Paddy Power cut Kameko to 10-1 from 25-1 for next year’s Investec Derby, but Balding is not looking too far ahead.

He added: “He’s a horse who thrives on work and racing and I’m so looking forward to next year with him. We’ll have to discuss that (targets) — it depends how far we think he can stay — but I’m thrilled he’s a Group One winner at two.

“I’m so thrilled for Sheikh Fahad (owner), who has been a great supporter of me, and Oisin as well.”

It was an emotional success for the Qatar Racing team following the sad death of the top-class Roaring Lion earlier this year.

Another son of Kitten’s Joy, he was narrowly beaten by Saxon Warrior in this race two years ago, but went on to win four Group Ones as a three-year-old.

Murphy said: "I'm thrilled for the whole Qatar Racing team. It’s very hard to win Group Ones and this is my first domestic Group One winner for Andrew.

"He's by the same sire as Roaring Lion. He has got a way to go before he is anywhere near as good as him, but this is a brilliant start.

"He relaxed brilliantly today and it was very smooth. Andrew really believed him - I wasn’t quite so sure having been beaten in a Group Two last time, but how impressive was that?

"That instant acceleration was there and moving forward to next year, we can certainly dream."

!We witnessed Roaring Lion just get touched off when he probably should have won this race (in 2017), so to come here with another son of Kitten's Joy and win - and justify Andrew’s complete faith - was really sensational.

"All the team are in California and I keep getting pictures of sunshine and sand. We've got floodlights and sand here and I much prefer it!

"To be the best you've got to take on the best, and beat the best. It’s fantastic to be able to fight a battle like this and come out on top.