Keatley bows out with 20/1 Leopardstown winner 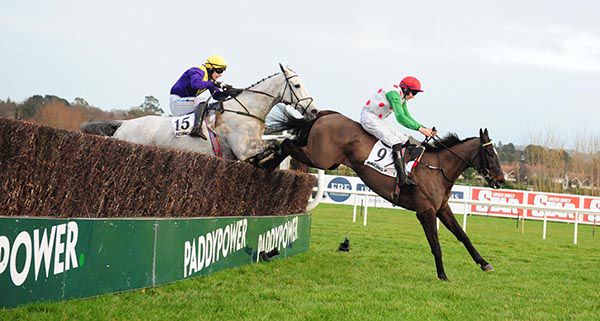 Adrian Keatley wound up his training career in Ireland in the best possible fashion as Drumconnor Lad recorded a shock win in the Bet Through The Free Racing Post App Handicap Chase at Leopardstown.

Keatley, who enjoyed his finest hour when saddling Jet Setting to land the Tattersalls Irish 1,000 Guineas in 2016, announced he is relocating to the north of England after this welcome 20/1 success.

The nine-year-old gelding asserted under Adrian Heskin approaching the final flight and kept on under pressure on the run-in to hold Batcio by half a length.

The pair drew nine lengths clear of Allardyce in third, with Powersbomb completing the places in fourth.

Keatley said, “We’re moving over to Malton in Yorkshire and some of the horses have gone over already. I’ve been reducing the numbers and will bring just six horses in total over with me but they are six that I think can all win.

“For the last year and a half it’s become a struggle and if you are not making money it’s a no brainer to stop and start again to try and make a living.

“I’ll be sharing a yard with Tony Coyle and this horse will qualify for the veteran chases over there so hopefully he can do well.

“It is very hard to compete in Ireland if you don’t have any of the big owners.”