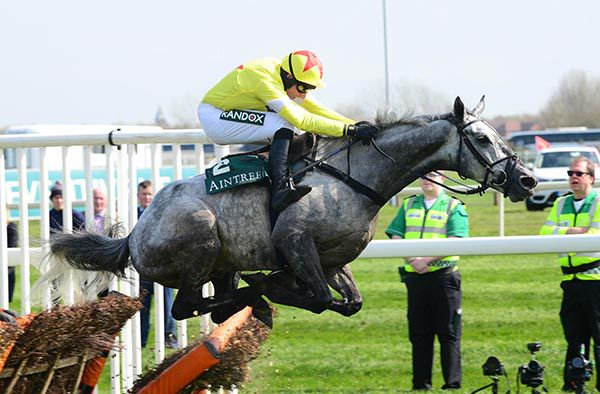 Dan Skelton is hoping for a rich reward after deciding to roll the dice with Aux Ptits Soins in the Ladbrokes Champion Stayers Hurdle at Punchestown.

It has been quite a year for the Alcester-based trainer, who recently became only the second in history from the National Hunt ranks to register 200 winners in a single British season — joining Martin Pipe in the record books while he was racking up an Easter Sunday six-timer.

Skelton also enjoyed a double at the Cheltenham Festival — claiming a first Grade One success with Roksana in the Mares’ Hurdle — and believes he could double his top-level tally in Thursday’s Punchestown feature.

The John Hales-trained grey Aux Ptits Soins faces a significant step up in class, but did run out an impressive winner of a competitive handicap at Aintree’s Grand National meeting.

Skelton said: “We were going to draw stumps for the season — but in reality he is nine years old, and there is no Paisley Park (Stayers’ Hurdle winner) in there.

“The highest-rated horse is Bapaume, and perhaps this year it is worth having a crack at it.

“I’m happy with how he is — and he will be turned out after this, no matter what.”

Willie Mullins has dominated this three-mile contest in recent years — registering his seventh success when Faugheen brought the house down with an all-the-way success 12 months ago.

The Closutton trainer expects all three to go well.

“Bapaume probably ran a career-best in the Stayers at Cheltenham, and I think he’ll run a big race here. The track will suit him a lot better,” said Mullins.

“Bacardys promises to win a race like this but just hasn’t quite got there yet, so I hope he can produce another good run.

“Killultagh Vic races with cheek-pieces for the first time. He jumped too big the last day, and I hope he can adapt to hurdles quickly here.

“He won a Grade One over this course and distance as a novice, and I hope he’ll go well again.”

Aux Ptits Soins is one of three British-trained contenders — along with Colin Tizzard’s Vision Des Flos and Harry Fry’s Unowhatimeanharry, winner of this race in 2017.

Fry said: “He obviously won the race two years ago. He isn’t quite at the same level these days, and it’s no easy task, but he owes us nothing and he’s there to take his chance.

“He needs to bounce back, but he’s in good form and we’ll see how he gets on.”

The Jessica Harrington-trained Not Many Left completes the 10-strong field.