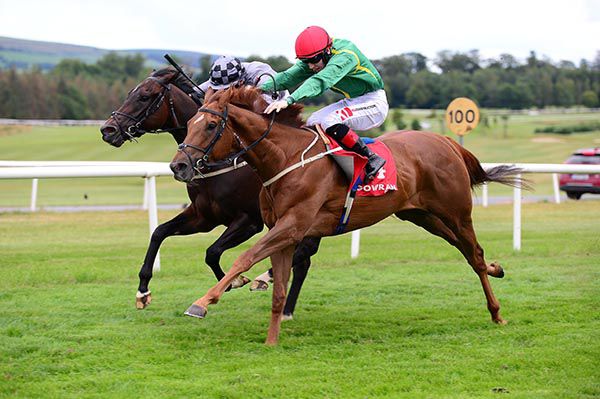 Colin Keane extended his lead to seven (61-54) over Donnacha O’Brien in the Flat jockeys championship when completing a 14/1 double at Gowran Park aboard Long Arm in the concluding Ballykeefe Distillery Median Auction Race.

Ger Lyons saddled two of the five runners in this extended nine furlongs event, and it looked significant that Keane partnered newcomer Long Arm in preference to the 82-rated Invasion Day

The pair had the race between them from over a furlong and drew right away in the closing stages with Long Arm just providing the stronger near the line.

The 6/4 chance had a neck to spare over his stable-companion, with evens favourite all of six and a half lengths back in third.

Keane was also on the mark this afternoon when Lady Olenna took the Irish Stallion Farms EBF Fillies Maiden.

Long Arm hails from a family that the trainer knows well as he's a half-brother to multiple Group race winner Who's Steph as well as useful handicapper Thunder Crash.

Lyons said, “He's a nice horse and obviously the pedigree speaks for itself. As you can see he's very much a work in progress. We expect him to be a 12 furlong horse in time.

“They didn't go much of a gallop there and you could see the greenness. It's not ideal beating yourself but that's life and I've given the other horse plenty of chances.

“It was a nice race to start this horse in. He's handled the ground, Steph likes soft.

“He's always been good and honest at home. I'd like to think he has a nice future ahead of him but he's one that we won't kill at three. We just have to look after him and go gently gently but it's a good start.”