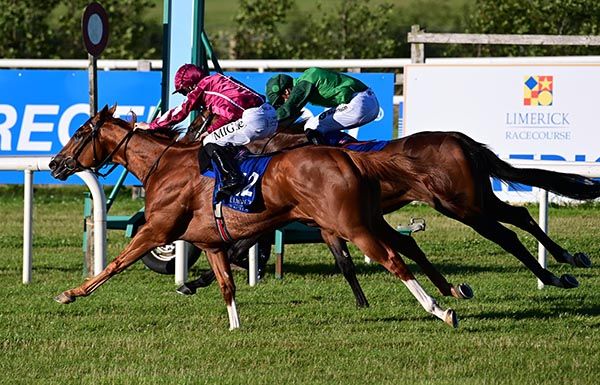 The 1m4f maiden saw trainer Joseph O’Brien send out a one-two as Magellan Strait (28/1) collared the better-fancied Nusret on the line to win by the minimum distance.

The stablemates were both settled behind the leaders and it was Nusret who got first run in the straight to lead inside the final quarter mile. The eventual winner began to motor over a furlong out and stayed on strongly in the final furlong for a last-gasp victory. The front-running Mercury Mission was left three and a half lengths further back in third.

A gelded son of Australia, the Ray Grehan-owned winner was sixth on debut at Tipperary and is a half-brother to useful types Lagostovegas and Baby Zeus.

It was a third winner of the evening for O’Brien after Sir Antonino at this venue and Thornbrook at Leopardstown.

Winning rider Mikey Sheehy commented: "He was slowly away on debut and was slowly away today as well and I had to use up some gas to get him where I wanted him. He was still very raw during the race and I took him to the outside coming down the hill because I wanted a clear run at them.

"He really rallied for me and hit the line strong.

"There is plenty of improvement still to come and I think he is a nice horse to look forward to."