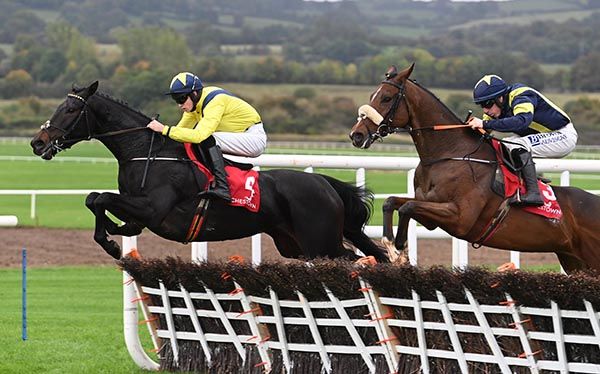 The French bred five year old won two summer bumpers at Punchestown and Killarney and having made a winning jumps debut, again at Punchestown, in October, connections are now stepping him to top-level company for the first time.

Jockey Michael O'Sullivan has won all three races on the son of French Navy and says “I've ridden him in three races now and have won on him three times so there aren't many horses I can say that about. We are really looking forward to him, he seems in good shape.

“He seems to do everything so easily so far but obviously it is a big step up. We are stepping into the unknown running him in Grade 1 company after having only one hurdle run so a nice run and we'll be happy. It is a good experience for him and I suppose we will know where we stand with how good he is.

“I can't fault him on what he has done so far, he travels very easy and won very easily on all his starts. He jumped very well on his first start over hurdles, he is vert straightforward and is a great ride and I'm very much looking forward to him.”

Cheltenham to inspect on Friday for Trials Day

Officials at Cheltenham have called a noon inspection on Friday ahead of Saturday’s card, with discussions under way to have a contingency plan of transferring the fixture to Sunday.

Altior 'more comfortable' in his recovery from colic

Nicky Henderson has issued a positive bulletin on Altior, who is recovering after a severe bout of colic.

Leading jump jockey Sean Bowen has received an 18-day ban, with six days deferred for two months, for misuse of the whip after a British Horseracing Authority disciplinary panel hearing.