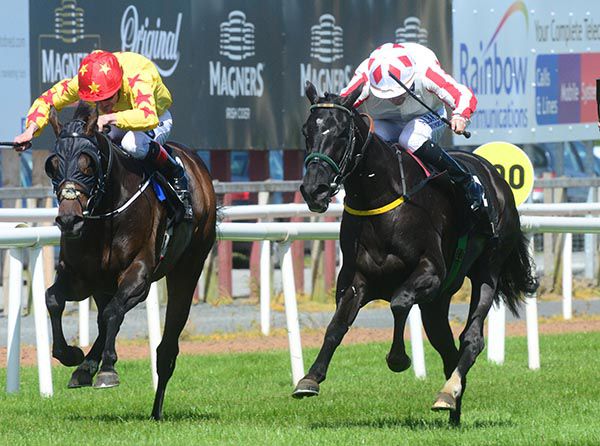 Noel Meade will consider a trip to York later this summer with Dadoozdart following his lucrative success in the Ulster Derby.

After beating South Pacific in a conditions race at Naas in May, a potential rematch was on the cards in the King George V Stakes at Royal Ascot.

However, Dadoozdart appeared likely to miss the cut there — and after connections decided against travelling across the Irish Sea, they had to watch on as South Pacific claimed Royal Ascot glory.

Dadoozdart, however, then claimed a big-race victory of his own at Down Royal two days later.

Meade said: “The handicapper dropped him 1lb the week before Ascot, and that just put him out of it (King George V Stakes). We were second reserve and decided it wasn’t worth the risk.

“Three did come out in the end, but we still wouldn’t have got in because they didn’t come out until the day. Anyway, he was good in the north (Down Royal) — and all’s well that ends well.

“He’s come out of the race well. I’m not sure where we’re going to go next with him — we’ll wait and see.

“There is the three-year-old handicap at York — the Melrose (August 24). That would be in the mix, anyway.”

Dadoozdart is one of just a handful of horses Meade has to run on the Flat this season, with the Tu Va handler far more renowned for his exploits in the National Hunt sphere.

Asked whether the three-year-old son of Dawn Approach could eventually pursue a jumping career himself, Meade added: “We’ll see. We’ll concentrate on the Flat for the time being and see how we go.”