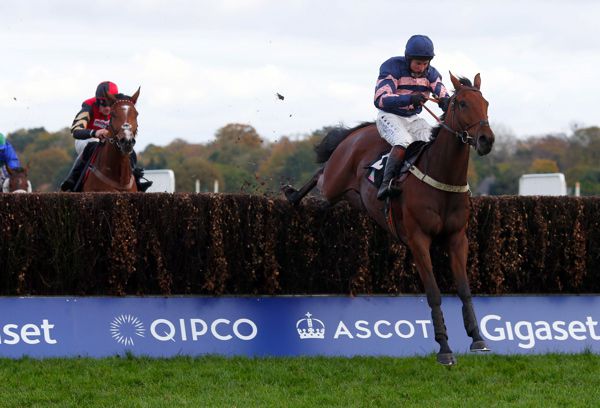 Goshen is set to go hurdling this month after completing an impressive hat-trick on the Flat last week.

Gary Moore has earmarked a juvenile hurdle over two miles, one and a half furlongs at Fontwell on November 17 — which he won last season with Tazka.

The Authorized gelding did not make his seasonal debut until June but has been undefeated at Brighton, Sandown and Nottingham — and Moore feels the time is right to try him over obstacles.

“He’s doing fine. He went up 8lb for winning the other day — which I thought was pretty fair,” said the West Sussex trainer.

“He now goes jumping. He has schooled well in the past.”

Two of Moore’s seasoned campaigners over fences, Benatar and Baron Alco, are both set to return from lengthy absences before the end of the year.

Benatar, last seen well behind Cyrname at Ascot in January, has the Ladbrokes Trophy at Newbury on November 30 as his objective.

“Hopefully we’ll gear him for that. That will be his first run of the season,” said Moore.

“He’s been doing well. He’s been in since July.”

A December comeback is likely for Baron Alco, who last saw action when fourth to Frodon in the Caspian Caviar Gold Cup at Cheltenham in December — after winning the BetVictor Gold Cup at the same course last November.

Moore said: “He’ll be out at Christmas time.

“I’ve nothing planned for him yet. He’s working away now.”