Moyhenna could tackle Lalor at Doncaster 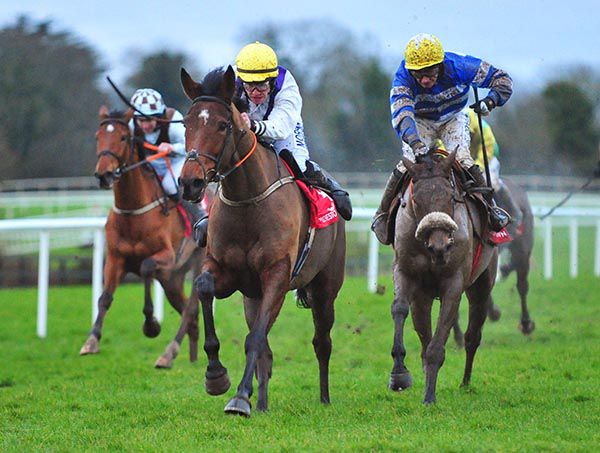 The only Irish-trained contender, Hogan’s mare has finished second on each of her two starts over fences to date, behind two high-class Willie Mullins inmates in Camelia De Cotte and Pravalaguna.

Hogan, who also entered the hat-trick-seeking Moskovite in the olbg.com Yorkshire Rose Mares’ Hurdle, said: “They are just speculative entries at this stage. I saw the races were reopened, so we’ve put them in and we’ll have a look.

“If it looked like there might be a bit of cut in the ground and they had a chance of getting some black type, we could bring them across.

“I’m over there for the sales on Wednesday so I’ll have a look at the ground and go from there.”

Kayley Woollacott’s stable star Lalor made a sparkling debut over fences at Cheltenham in November, but odds-on backers had their fingers burnt when he could finish only third behind Dynamite Dollars in the Henry VIII Novices’ Chase at Sandown on his next start.

Despite that reverse, he is a general 5-1 favourite for the Arkle at the Cheltenham Festival in March and those odds will likely shorten further if he can get back on the winning trail on Town Moor.

Other hopefuls for the Grade Two contest include Alan King’s Ballywood, the Mick Channon-trained Glen Forsa and Knocknanuss from Gary Moore’s yard.

Moskovite is one of 10 entries for the Mares’ Hurdle.

Others in contention include Tom Lacey’s course and distance winner Via Delle Volte, Peter Atkinson’s Irish Roe and Phil Kirby’s star mare Lady Buttons, although the latter is more likely to remain over fences in a Listed chase at Huntingdon on Friday.

Kirby said: “The plan is to go to Huntingdon at this stage. I put her in at Doncaster as there were only five in on Monday and the top-rated wasn’t very high.”