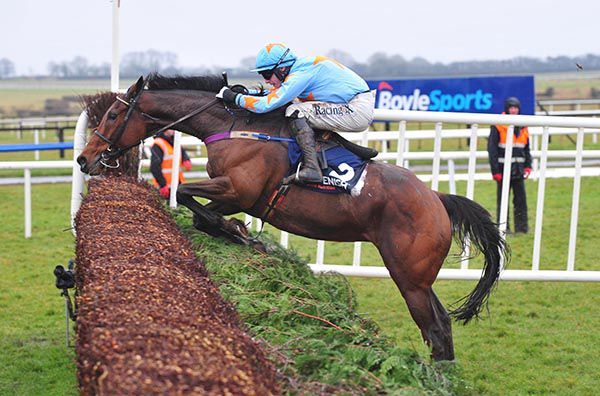 Willie Mullins is looking forward to seeing Un De Sceaux defend his crown in the BoyleSports Champion Chase at Punchestown next week.

The popular veteran was a brilliant winner of the two-mile Grade One last season — seeing off his better-fancied stablemates Douvan and Min under an enterprising ride from the champion trainer’s son, Patrick.

Un De Sceaux has run just twice this season — filling the runner-up spot behind Altior in the Tingle Creek at Sandown in December before finishing fifth when bidding for a second win in the Ryanair Chase at the Cheltenham Festival last month — but is set to return on Tuesday.

Mullins appears set to dominate the feature event on the opening day of the Festival — with recent Aintree winner Min, Douvan, Footpad and Great Field all in the mix alongside Un De Sceaux.

Mullins said: “Douvan is doing fast work, and we’ll see how he is going.

“Footpad has had sort of an in-and-out season, so we’re going to have to see how he is.

“Great Field is just back from a break, so he’ll run too — all being well.

“I think the one that I’m looking forward to getting there is Un De Sceaux if we get the weather. I’d like to get a bit of rain for him, but the ground will be safe.

“He put in a huge performance there last year — and if he could do anything like that again this year he must go there with a very good chance.”

Un De Sceaux is a best-priced 4-1 for the Champion Chase, with Min the 8-11 favourite and Footpad and Douvan priced up at 6-1 and 7-1 respectively.

Perhaps the most anticipated clash of the entire Festival is between the Mullins-trained pair of Al Boum Photo and Kemboy in Wednesday’s Coral Punchestown Gold Cup.

Al Boum Photo provided the Closutton maestro with an elusive first win in the Cheltenham Gold Cup last month, a race in which Kemboy unseated his rider after the first fence.

However, Kemboy has since bounced back with a brilliant victory in the Betway Bowl at Aintree — and the stable companions are set to renew rivalry at Punchestown next week.

Asked whether Al Boum Photo and Kemboy were both likely to run, Mullins said: “I think so. We’ve Bellshill there as well, and they are all in good shape.

“This is the type of race that they should run in. So fingers crossed everything stays right until next week, and they will all line up.”

Mullins saddled a staggering 18 winners at last year’s Punchestown Festival, a tally which for the second year in succession saw him claw back Gordon Elliott’s significant lead and led to him being crowned champion trainer for a 12th time.

This year he already has a 13th title all but sewn up, but he will not be resting on his laurels.

Asked if there was one horse in particular he was looking forward to seeing run, Mullins added: “Usually I just like to get them there, and hopefully some of the stars shine. You know they all won’t shine and you know you’re going to have ups and downs.

“Last year was extraordinary. From the first day to the second day was the lowest point to the highest point, so you never know what is going to happen.

“We just hope that most of the horses can run well, we don’t have any injuries and we can just sit back and enjoy the whole drama that the big festivals are nowadays.”