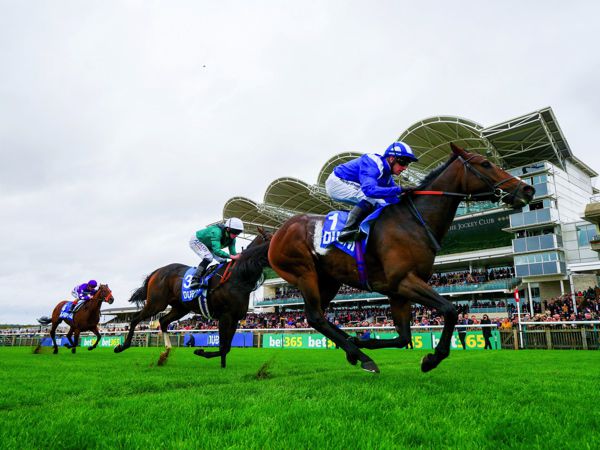 Mustashry produced a fine front-running display to get back on the winning trail in the Godolphin Stud And Stable Staff Awards Challenge Stakes at Newmarket.

An impressive winner of the Lockinge Stakes at Newbury in the spring, the Sir Michael Stoute-trained five-year-old had since struggled in both the Queen Anne at Royal Ascot and the Coral-Eclipse at Sandown.

Making his first in just over three months, Mustashry was sent off at 2-1 in the hands of Jim Crowley — with his Group One penalty meaning he had to concede upwards of 4lb to each of his four rivals at Group Two level.

The gelded son of Tamayuz was soon bowling along in front and while Limato — winner of this race in each of the past two seasons — did his best to close the gap late on, Mustashry never wilted and denied Henry Candy’s stable stalwart the hat-trick by a length and a quarter.

Angus Gold, racing manager to Mustashry’s owner Sheikh Hamdan Al Maktoum, said: “After the Eclipse he came back very sore and Michael said it looked bad for a while.

“We thought he might have fractured his pelvis and weirdly they scanned him and there was nothing and he came sound surprisingly quickly.

“They eased their way back into work with him and he has been fine ever since.”

Mustashry finished down the field behind his then-stablemate Expert Eye in last year’s Breeders’ Cup Mile, but a second tilt at the race in Santa Anita next month will be considered.

Gold added: “Whether Sheikh Hamdan lets him go aboard or keeps him for next year is his decision.

“I think he is a very versatile — he can do seven to nine furlongs and possibly even a mile and a quarter.

“He is helped by a fantastic attitude. He loves his work and being back at the races. He is a lovely horse to have. He has had so many problems over his career, but when he is good he is good.

“I’m sure the question will come up about the Breeders’ Cup, but I don’t know as we’ve not discussed it. We had to see how he come back from his last injury and he has come back pretty good.”

Candy said of Limato: “He ran a wonderful race and I’m delighted with him. Ryan (Moore) said he was full of enthusiasm, and that’s all that matters.

“It’s soft enough and that would have slightly blunted his speed, but I don’t think we can use that as an excuse. That’s it for the year now.

“He might not run for seven months and we might wait for the Criterion on the July course and see how he is in the spring. He will be aimed at seven-furlong races just below top class.”

Hot favourite Shine So Bright finished last of all.