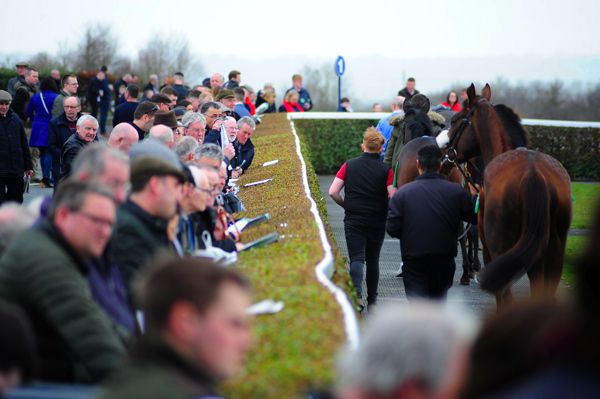 Sequence Events, the Irish-based concert promoter, will sponsor the Group Three Vintage Crop Stakes, the first big staying race of the 2019 Irish Flat season and the highlight on a seven-race card at Navan on Sunday.

The Sequence Events Vintage Crop Stakes over 14 furlongs is the sole Irish qualifier for the Weatherbys Hamilton Stayers’ Million.

The winner of Sunday’s race would emulate the brilliant Stradivarius and scoop the £1 million bonus if going on to win the Gold Cup at Royal Ascot, the Qatar Goodwood Cup at Goodwood and the Weatherbys Hamilton Lonsdale Cup at York’s Ebor Festival.

In addition to the race at Navan, there are qualifying races in Dubai, Germany and France to supplement four British qualifiers. As was the case in 2018, the £1 million will be split between the connections of the successful horse, with 70 per cent awarded to the owner and 30 per cent divided equally between the trainer, stable staff, breeder and jockey.

Aidan O'Brien holds the strongest hand after this afternoon’s latest forfeit stage for Sunday’s race and could yet be represented by Classic winners Kew Gardens and Capri.

Kew Gardens enjoyed a stellar year in 2018, adding the Doncaster St Leger to wins earlier in the season in the Group 2 Queen's Vase at Royal Ascot and the Group 1 Grand Prix de Paris at Longchamp.

Capri is a dual Classic winner having won the Dubai Duty Free Irish Derby and the Doncaster St Leger in 2017. The Ballydoyle entry is further strengthened by Southern France, third behind Kew Gardens in last season’s Doncaster St Leger.

The Ger Lyons-trained Mustajeer will relish the step back up in distance for Sunday’s race.

Whirling Dervish got the better of Jim Bolger’s Twilight Payment to win at Gowran Park two weeks ago and they could well renew rivalry.

Now in the care of Joseph O'Brien, Cimeara was a good winner at Cork and is another intriguing contender.

“It is a brilliant concept and the extension of the qualifying races from four to eight has certainly helped Navan in broadening the interest of the race with really strong entries and also attracting a non-industry sponsor in Sequence Events for the race.

"It is one of our flagship races and this exciting news will certainly capture everyone’s imagination.”

Donal McCarthy, Director of Sequence Events, said: “We are delighted to be associated with supporting Navan through sponsorship of the prestigious Group 3 Sequence Events Vintage Crop Stakes.

"With an impressive roll call of previous winners such as Order Of St George, Fame And Glory, Leading Light and Yeats, Sequence Events sees this as a great opportunity to promote its brand to the wide audience in Ireland and abroad that the race will reach.”