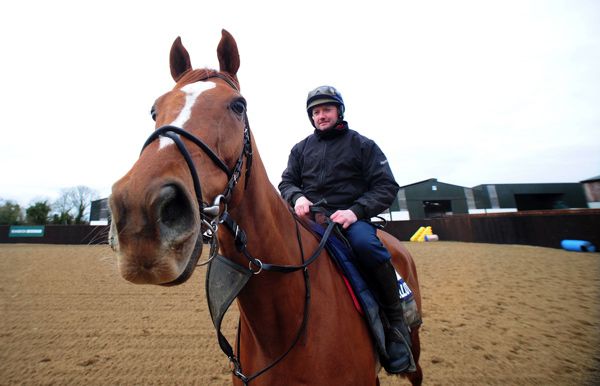 Whether Samcro turns up at the Cheltenham Festival is likely to be decided in the next 10 days — according to Gordon Elliott.

Last year’s star novice hurdler has failed to win this season — at Down Royal, Newcastle and Leopardstown — and after defeat at the latter, it was revealed he was suffering from a lung infection.

He is now back in work with a possible tilt at the Stayers’ Hurdle on the cards if all goes well.

“He has options in Cheltenham, in Punchestown and in Aintree.

“The next 10 days are important — I can’t tell you any more than that.”

The trainer is waiting on more evidence in Samcro’s preparation to tell him if Cheltenham is on the agenda.

“He looks good — but until they do a good few bits of work, you don’t know where you’re going or what you’re doing,” added Elliott.

“It’s not the be all and end all — if he gets to Cheltenham he does, and if he doesn’t he could go to Aintree or Punchestown — or we could take the shoes off him and go chasing next year.

“No decision has been on where he’s going yet.”

“I won’t be taking any chances with him,” he said.

“If he is going to go (to Cheltenham) I’d imagine it would be the Stayers’ Hurdle — but nothing is concrete.

“He had a lung infection deep down. It happens from time to time with good horses.

“When horses are as good as he is and lose their form like that, nine times out of 10 there is a problem.”

At this stage, Samcro appears to be recovering well.

“He had a week or a fortnight not doing much,” said Elliott.

“He had some antibiotics — and that was it.

“It’s not ideal, but it’s not the end of the world.