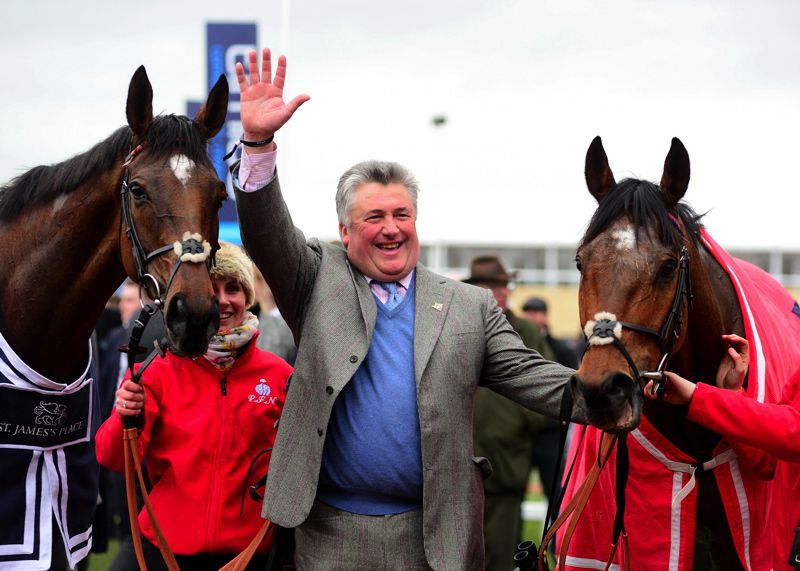 Paul Nicholls is double-handed with Present Man and Give Me A Copper as he bids for a remarkable 10th win in the Badger Beers Silver Trophy Handicap Chase at Wincanton.

Present Man himself has provided Nicholls with the last two of those victories, and is seeking his hat-trick on Saturday under regular rider Bryony Frost.

Give Me A Copper has always threatened to be a good horse — but injuries have held him back, and the nine-year-old will be having just his 10th career start under rules.

Several horses have won the race twice — including Nicholls’ Flaked Oats, Panto Prince and Swansea Bay — but none has managed three.

“Present Man has won the last two — and he looks amazing,” said Nicholls.

“He worked well on Thursday morning. I suspect Present Man is fully wound up, compared to Give Me A Copper.

“I think it is a more competitive race than what he has contested the last two seasons.

“He is 4lb higher, so he has got it all to do. If he wins it he will be the first horse to win it three years in a row, and it will be my 10th win in the race as well.”

Nicholls expects conditions to suit Give Me A Copper, but senses he may be a better horse with this weekend’s run under his belt.

“He had a bit of a stop-start (time) last season, because he had missed a year,” added the Ditcheat trainer.

“He ran a couple of good races at the start and the end of the season at Sandown. I’ve had an easier passage this year with him, though.

“If it is on the easier side of good that will be perfect for him. I just think he wants a flat track, and that is the key for him, but I think he just might come on for the run.”

Grand National fourth Walk In The Mill returns to action for Robert Walford, and not surprisingly a return to Aintree is his main aim.

However, he will be heading there before April with next month’s Becher Chase, which he won last season, his first big aim.

“He’s in good form, but the ground probably won’t be soft enough for him,” said Walford.

“Of course, the problem we have regarding Aintree is that it is so hard to get into the National these days. A rating of about 140 is the cut-off point, and he’s rated 142 now.

“What we’re hoping is that another good run in the Becher will secure his spot in the National.”

Last year’s runner-up Sumkindofking is back again for Tom George, having begun his campaign at the track last month.

George said: “He was second last year. He likes the track and likes goodish ground. The stronger they go, the better.

“You would hope he’d come on a bit for his first run, so we’ll see how we go.”

Top weight is the 11-year-old Whisper, who is now trained by Sam Thomas; Philip Hobbs runs Rock The Kasbah and Beau Du Brizais — while Colin Tizzard’s White Moon will be hoping for better luck, having fallen with the race in the bag over slightly further at this course on his return to action.

Neil Mulholland runs two — with The Young Master back five years after he won the race only to be disqualified when it emerged he was not qualified to run because he had only had two previous outings over fences.

He will be joined by Soupy Soups, who has been in good form through the summer.