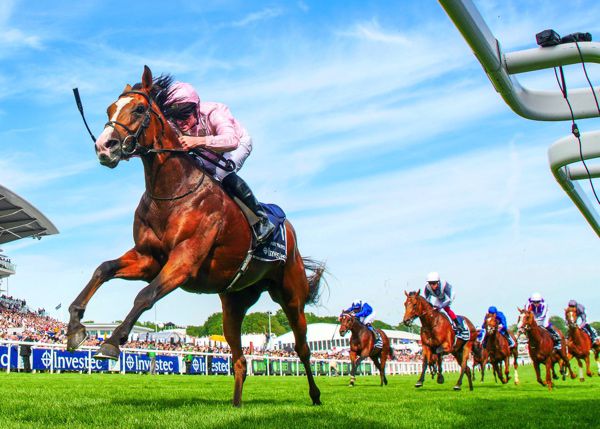 The Investec Derby, who will be ridden by Ryan Moore after Seamie Heffernan partnered him to glory at Epsom last time out, will bid to complete a double last achieved by Harzand in 2016.

Broome, who was fourth at Epsom, Norway, Il Paradiso, Sovereign and Western Australia remain in the mix for Ballydoyle.

“At the moment it looks like Anthony Van Dyck, Broome, Norway and Sovereign, and we still have to decide on Western Australia and Il Paradiso,” said O’Brien, speaking at a press morning for the race.

“Ryan always rides the number one and that is obviously Anthony Van Dyck, that’s the way it always is in a Derby.”

Kevin Prendergast’s Madhmoon is the biggest threat to O’Brien’s dominance.

He overcame a troubled run to finish a fine third at Epsom.

Prendergast, who turns 87 in a few weeks’ time, said: “My father won the Irish Derby winner four times, the first one being Dark Warrior in 1950.

“Madhmoon is a good horse and hopefully he has a good chance. He’s got a battalion to beat, but hopefully he can act as well as he did at Epsom and we might get a result.

“All the horses that ran in the Derby have run creditably since, I think there were two winners at Royal Ascot out of it.

“Aidan said it was one of the better Derbys that he’s had horses to run in, so hopefully he was right.

Chris Hayes rides Madhmoon and said of Epsom: “To go down by half a length because of things you can’t control, it was a bitter pill to swallow but hopefully we can put it right on his next start.

“I think the Curragh will suit him better, Epsom is very demanding and you need things to go right, as I found out. The Curragh is a fair track and I’ll imagine he’ll be much more at home, it’s also just five minutes up the road which has to be a positive.

“I don’t think the occasion got to him, everything went right until the road crossing which set him racing sooner than I wanted.

“We were half a length off being perfect, hopefully we can put that right.”