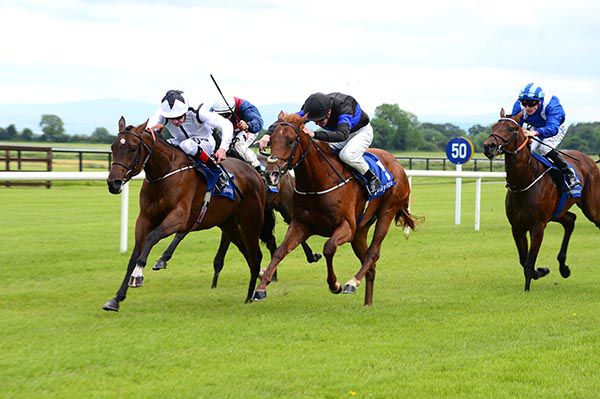 The opener at Fairyhouse, the Irish Stallion Farms EBF Maiden (Plus 10 Race), went the way of 33/1 chance Dolce Sicily

For Ross O’Sullivan and Declan McDonogh the successful Epaulette filly broke well and made all to beat favourite Never Before by a neck.

“Katie (Walsh, wife) bought her as a yearling for ten grand in Newmarket. Epaulette isn’t that sexy but the mare had two winners from two runners," said O'Sullivan.

“She had two runs over five, ran well the first day in Naas and not a bad run then in the Curragh. She’s bred to get six or seven, she knew her job and was able to dictate from the front.

“It’s my first two-year-old winner. We’ve had a few seconds and I’m delighted to have a juvenile winner.

“A bunch of lads from Dublin that work in banking own her but unfortunately they weren’t able to get here. I’d say they will have a good night tonight!”

The Stewards enquired into an incident after leaving the stalls involving Life And Strife ridden by C. O'Donoghue,and Kocasandra ridden by C.P. Hoban, where it appeared that Life and Strife ran short of room and checked. Evidence was heard from the riders concerned. Having viewed the recording of the race and considered the evidence, the Stewards were of the opinion that C. P. Hoban was in breach of rule 214 in that he had ridden carelessly and having considered his record in this regard, suspended him for one race day.

C. O'Donoghue, rider of Life And Strife trained by A. Oliver, reported to the Clerk of Scales that his mount was hampered in running.

At the request of the Stewards, D. O'Brien, rider of Ohio State (USA), trained by A.P.O'Brien, reported to the Stewards' Secretaries that his mount ran disappointingly.