One Cool Poet all set for Petingo at Leopardstown 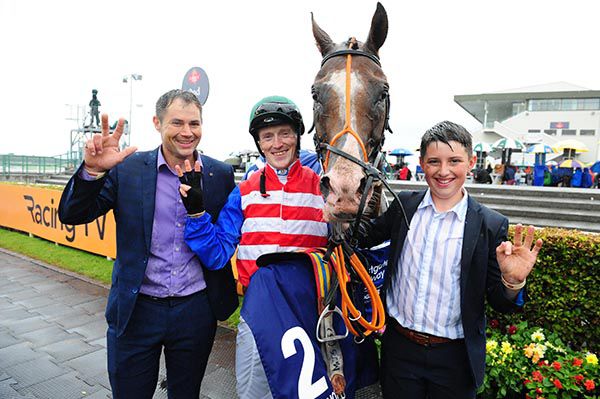 Mathew Smith, his son James and Billy Lee with One Cool Poet after winning for the third time at Galway
© Photo Healy Racing

The connections of the remarkable One Cool Poet are bullish that he can earn his biggest win yet on day one of Longines Irish Champions Weekend at Leopardstown on Saturday.

The horse will be ridden by Billy Lee in the Irish Stallion Farms EBF 'Petingo' Handicap of €150,000, with hopes high he can make it four successive wins.

The Galway Festival was a hugely successful one for racehorse co-owner Ollie Ryan and trainer Matthew Smith.

And it all centred around One Cool Poet, who made history: he became the first to win three Flat races in the same week at Galway.

Basking in the afterglow, Ryan and Smith even appeared on national radio.

"All you ever dream about as an owner is a winner at Galway. We never thought beyond the Tuesday. We actually had no real plan I think."

And now Smith is hopeful the horse should finish in "the first couple" on Saturday.

"We gave him a two-week break after Galway, and this has been the plan since. It couldn't not be with that prize-money and the owners are buzzing.

"Billy will ride again and his mark is up to 90 which makes it much harder. However, he's run well here before and you'd have to be hopeful.

"I won the Grade 2 Flying Bolt Chase at Navan before with Rawnaq but this would rival that if he won."