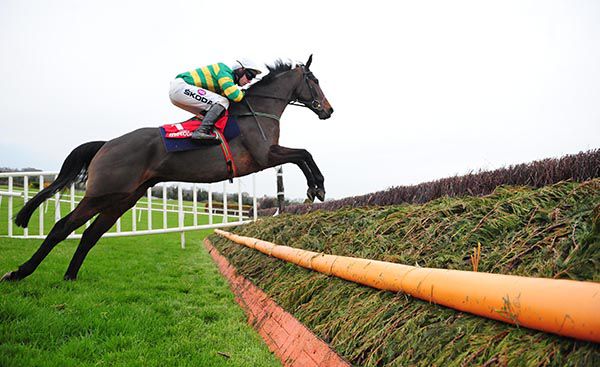 Ballyoisin’s next move is up for discussion after he won the Fortria Chase for a second successive year at Navan.

The eight-year-old’s defence of his Grade Two crown on Sunday capped a great weekend for owner JP McManus, who also had victories to celebrate for a clutch of hugely exciting novices.

Enda Bolger’s Ballyoisin was winning for the 10th time in 22 outings, and may head to Leopardstown over Christmas — as he did when fifth to Simply Ned last season.

McManus’ racing manager Frank Berry said: “We haven’t had a chat yet. We’ll sit on it for a week or so, and see whether he goes back to Leopardstown at Christmas or not, but nothing has been decided yet.

“He gets two and a half miles well, so we’ve got options. We’ll see how he comes out of this race first, but there’s no real plan at the minute.

“His jumping is good, he likes jumping fences — and especially at Navan, where he goes well.”

McManus’ Fakir D’Oudairies, a smart juvenile hurdler last term, beat dual Champion Hurdle runner-up Melon on his chasing debut — and the Joseph O’Brien novice is likely to be stepped up in grade now.

Berry said: “Fakir made a lovely start over fences.

“He’d been very competitive in good races last year over hurdles, so it was nice to see him do what he did and enjoy it.

“He’ll probably have to go into graded company now, somewhere before Christmas — you don’t have many other options.”

The Gordon Elliott-trained Andy Dufresne has a big reputation after being bought for £330,000 following a point-to-point win, and he made an impressive start to his hurdles career — while Elixir D’Ainay was another to break his maiden 24 hours earlier at Naas.

“Andy Dufresne only won a maiden hurdle, but he jumped great and won nicely,” said Berry.

“He couldn’t have done it any better — he’s something to look forward to.

“Elixir D’Ainay had a good old tussle up the straight (with Longhouse Poet) and he came out on the right side. I’d say they are two nice horses, two stayers in the making down the road.

“He’s in the Royal Bond, but all the nice ones get an entry because it closes quite early.”

It was not all positive for the McManus team over the weekend, though, with the smart Coney Island suffering an injury.

Berry said: “Coney Island won’t be out until the new year, he’s had a little bit of a setback.”