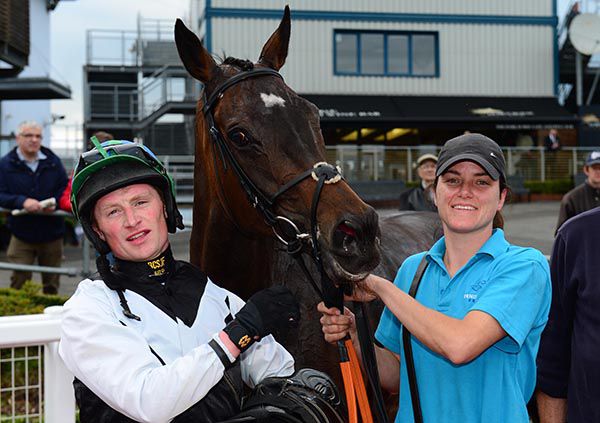 Gavin Cromwell and Jonathan Moore continue to be an alliance to have on side but for the second race in succession they had to settle for second place as Ozzie’s Way won the Apple Recruitment Handicap Hurdle at Down Royal.

This couldn’t have been any closer, and amazingly just a nose split them at the end of three miles.

Denis Hogan rode and trains Ozzie’s Way (8s from 12s on track and bigger earlier) for owner/breeder Tim Conroy. Static Jack was the Cromwell/Moore runner-up on this occasion, on his debut for the County Meath yard. Peaches And Cream finished second in the 7.20 for Cromwell and Moore, and a stable companion, Princess Mayson was also a silver medallist down at Limerick.

"I would have settled for a dead heat to be honest! It's a long run down from the third last," said Hogan.

"To be honest he was a different horse today. It's a pity Tim (Conroy) couldn't be here. He bred him and he is a great racegoer. It is a pity he couldn't travel today.

"We had a frustrating enough evening as a few didn't run up to scratch so it is good to get a winner.

"We'll possibly look for a beginners' chase for him, one of those rated beginners'. He jumps well and is from a very good family."

Looking ahead the Cloughjordan operator disclosed: "I'm really looking forward to Hathiq next week in the Rockingham.

"We don't think he was right in the 'Dash' and it all happened a bit fast for him, he hit the gates and it was over after he jumped.

"There are a lot of English challengers coming over which weren't there previously. They'll put it up to him."

The Stewards interviewed D.G. Hogan, rider of Ozzie's Way concerning his use of the whip in the latter stages of this race. Evidence was heard from the rider concerned. Having viewed a recording of the race and considered the evidence the Stewards were of the opinion that D.G. Hogan was in breach of R10(3)(g) by using his whip with excessive frequency and R10(3)(i) by failing to allow his mount at least three strides to respond to the whip. Having taken his previous record into consideration, the Stewards suspended D.G. Hogan for 1 raceday.

The Stewards interviewed J.M. Moore, rider of Static Jack, concerning his use of the whip in the latter stages of this race. Evidence was heard from the rider concerned which included a statement that his mount hung badly which in his opinion had cost him the winning of the race but had failed to report this fact at the first instance. Having viewed a recording of the race and considered the evidence the Stewards were of the opinion that a number of hits before the second last hurdle were to prevent his mount from hanging but the remaining hits with the whip amounted to a breach of R10(3)(g) by using his whip with excessive frequency. Furthermore, the Stewards were satisfied that J.M. Moore was in breach of Rule 213 (ii) by failing to report at first instance any matter that may have affected his mounts performance. Having taken his previous record into consideration for both breaches, the Stewards cautioned J.M. Moore on each account.

At the request of the Stewards, K.C. Sexton, rider of Vocarium trained by Peter Fahey, reported to the Stewards' Secretaries that his mount stumbled independently while racing along the back straight.