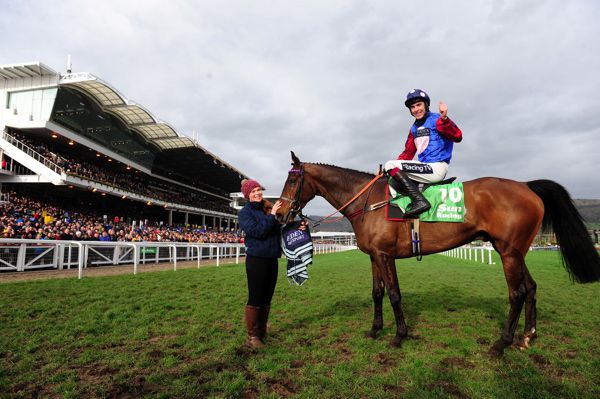 The seven-year-old was unbeaten in five starts last term — progressing from handicap victories at Aintree and Haydock to landing the Long Walk at Ascot and the Cleeve Hurdle at Cheltenham, before crowning his campaign in the Stayers’ Hurdle at Prestbury Park in March.

He is a best-priced 7-2 favourite to successfully defend his crown at next year’s Cheltenham Festival and Lavelle is hopeful her stable star can pick up where he left off — with the Ladbrokes Long Distance Hurdle at Newbury on November 29 his first objective.

Lavelle said: “Paisley is very good. He did very well over the summer and looks big and strong and quite round at the moment!

“He’s back cantering and we’re very happy with him. The Ladbrokes Trophy meeting at Newbury is his first target and after that the races sort of pick themselves — it’s definitely easier making plans for the top-class horses.

“Hopefully we’ll go to Newbury, then on to the Long Walk at Ascot, the Cleeve at Cheltenham and then straight to the Stayers’ Hurdle at the Festival and then possibly on to Punchestown — all fairly small targets!”

Training such a high-profile horse comes with a significant amount of pressure and expectation, but Lavelle is relishing the opportunity rather than feeling daunted.

She added: “It’s definitely a different feeling. Last season he was the up and coming one and now he’s the one who has to go and defend his crown.

“He’s still a young horse, though, who can only get stronger.