Patient approach with Search For A Song 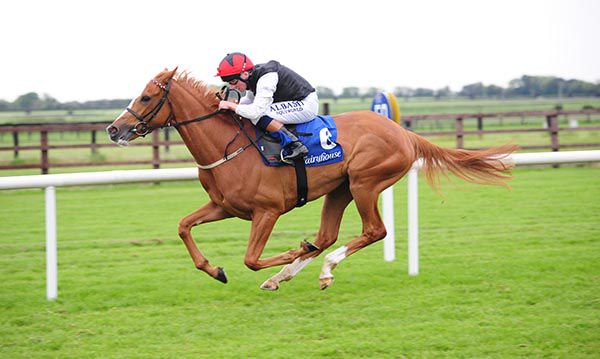 Connections of Search For A Song are keen to take “small steps” following her impressive debut victory at Fairyhouse last month.

The daughter of Galileo had fluffed her lines on what was due to be her racecourse introduction at Cork three weeks earlier, when she was made hot favourite but then refused to enter the starting stalls.

However, she rewarded those who kept the faith at Fairyhouse — justifying odds-on favouritism in the presence of her owner Eva Maria Bucher-Haefner, of Moyglare Stud Farm.

Search For A Song holds a whole host of big-race entries — including the Munster Oaks at Cork on Friday week and the Kerrygold Irish Oaks at the Curragh on July 20 — but plans are fluid at this stage.

“It was great to see her win the way she did after what happened at Cork. She obviously has a lot of ability — but as is often the case with these very good horses, there’s a bit of thinking there as well

“I think she caught everyone napping at Cork, but she went in the stalls fine at Fairyhouse.

“I would doubt she’ll go for the Munster Oaks. The problem with that race is you’ve then got quite a big gap until the Irish Oaks — and we also wouldn’t want to go back to Cork again, and she does the same as she did there last time.”

Craig added: “She (Search For A Song) is potentially a very nice filly, but she is a sister to Falcon Eight — and we’ve seen how long it’s taken him to mature.

“The mare has been fantastic — but for whatever reason, horses do seem to be coming to hand that bit later now. They don’t seem to really want to race until they’re three-and-a-half — whether that is down to the breeding or the way we raise them, I’m not sure.”