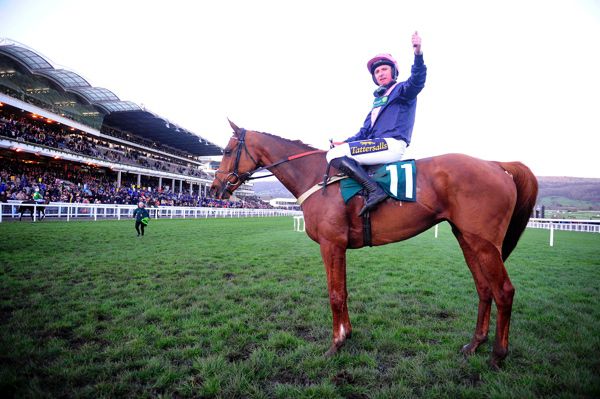 Ben Pauling has already earmarked the Ladbrokes Trophy and Randox Health Grand National in his diary as he plots big-race targets for two of his stable stars, Kildisart and Le Breuil.

The two chasers ended their 2018/19 campaigns with a memorable victory at one of the major spring Festivals — and Pauling describes himself as “very, very happy” with both, who have returned in rude health for the new season ahead.

He has identified Newbury’s Ladbrokes Trophy as a possible early staging post for both classy stayers, with next April’s National at Aintree already on the agenda for Le Breuil if all goes well.

One of the Cotswold trainer’s first tasks is to work out whether lightly-raced seven-year-old Kildisart is a championship horse in the making after impressing with a five-length victory when sent up in trip for Aintree’s Grade Three Betway Handicap Chase.

The alternative is to bag a big handicap, and there is none more sought-after than Newbury’s November showpiece.

Pauling said: “He obviously improved massively for the step up in trip at Aintree. He’s come back in looking very well indeed, and I couldn’t be happier with him.

“He is in that bracket at the moment where he’s top end of handicaps or he’s maybe going to be slightly under where you need to be to win level-weights races.

“But I think he’s certainly a horse on the improve — I think we’ve got a lot left to come.”

Kildisart will test the water either at Newbury, or in another Grade Three race — the Many Clouds Chase back at Aintree a week later.

“We’ve probably got an early-season target of something like the Ladbroke, or you could go for the Many Clouds at Aintree — obviously off levels,” Pauling added.

“I think he’s a very exciting horse, and I hope he can make that step from being a top-class handicapper and might become something more throughout the season.”

Either way, trips below three miles appear unlikely to be revisited.

“In and around three miles is fine,” said Pauling.

“He’s not devoid of speed at all — he’s won some nice races over two and a half. But just at that Grade One level in the spring at Cheltenham, he finished fourth in a JLT and ran exceptionally well but just looked slightly short of pace coming down the hill.

“Then a step up to three miles, carrying top weight in a handicap at Aintree is never an easy job — but he did it very nicely.”

Le Breuil had to work significantly harder for his success in a controversially gruelling edition of Cheltenham’s National Hunt Challenge Cup Amateur Riders’ Novices’ Chase, in which only four of 18 runners completed over almost four miles.

The seven-year-old prevailed thanks to abundant tenacity and stamina, and Pauling said: “If he’s healthy and well, come the end of the season, he will obviously hold a Grand National entry.

“He looks tailor-made for it — he stays the trip very well, and he’s an exceptionally good jumper.

“But he’s not a horse that we’ll sit back and campaign quietly, just with one race in mind. He will go and take his chance in some decent races — he’s another one that could be suited by something like the Ladbroke, and make plans from there.”

Pauling hopes Le Breuil may well be able to pick up a big prize, on his way to Aintree in April.

“I don’t think he’ll be slogging his way round in Eiders all season, trying to cherry-pick all those races,” he said.

“But there are plenty of options open to him — it was probably quite a decent performance when he won that day (at Cheltenham), and he’s still got a rating of 150, so he could be quite well-handicapped.”