Photo among trio of previous winners in Gold Cup entries 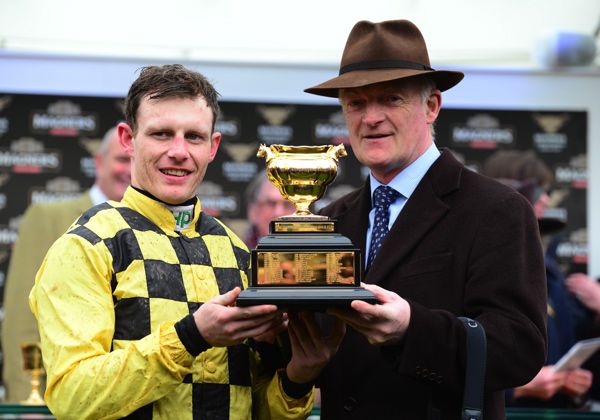 Al Boum Photo provided Willie Mullins with a first win in the blue riband event last season after several near-misses and he looked as good as ever when winning on his seasonal return at Tramore.

Mullins has several other strong strings to his bow in the shape of Kemboy, who beat Al Boum Photo at Punchestown last year, Bellshill and Real Steel.

Native River, who finished fourth last year and third in 2017 as well as winning in 2018, has only run once this term when strolling home in the Many Clouds Chase at Aintree.

He is trained by Colin Tizzard who has also entered Lostintranslation, the Betfair Chase winner who disappointed in the King George at Christmas.

Sizing John fell over hurdles on New Year’s Eve as he returned from over 700 days on the sidelines, but trainer Jessica Harrington has entered the 2017 victor this time around.

Nicky Henderson’s Santini is prominent in the ante-post lists despite scrambling home at Sandown on his only outing so far this season.

Gordon Elliott’s leading contender is Delta Work, who bounced back to his best over Christmas when winning the Savills Chase at Leopardstown.

Presenting Percy, Monalee and Road To Respect are also in the mix.

Third in last year’s race was the Nigel Twiston-Davies-trained Bristol De Mai and he is likely to be back once more after running in the Cotswold Chase later this month.

Anthony Bromley, racing manager for owners Simon Munir and Isaac Souede, said: “Bristol De Mai has been pleasing Nigel and is on schedule for the Cotswold Chase at the end of the month, in preparation hopefully for another tilt at the Gold Cup.

“The idea after the Betfair Chase was to always go Cotswold Chase and then Gold Cup, and Nigel has been particularly happy with him of late. There wasn’t really a race for him over Christmas, as we did not want to take him to Kempton because he hasn’t really fired there for the last couple of years.

“He finished third in the Gold Cup last year and, although he is fairly big odds as things stand, we are looking forward to having another crack at it. Maybe his odds are a touch too big, but we are not kidding ourselves because it is going to be a tough ask. I suppose if he goes and wins the Cotswold Chase, he will shorten, won’t he?

“We have put him in the Ryanair Chase as well, just to give us that option, but it is more than likely that he goes for the Gold Cup.”

The first two home in the Ladbrokes Trophy, De Rasher Counter and The Conditional, as well as Discorama and Elegant Escape, are others with the option.