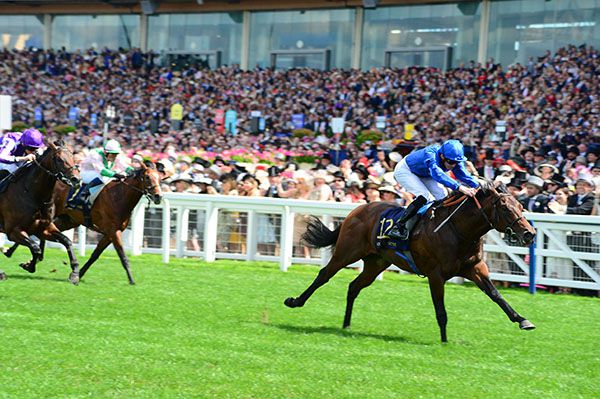 Pinatubo maintained his unbeaten record with a deeply impressive display in the Chesham Stakes at Royal Ascot.

Having followed up his winning debut at Wolverhampton with victory in the Woodcote at Epsom three weeks ago, Charlie Appleby’s colt was a 3-1 shot to complete his hat-trick in this seven-furlong Listed event under James Doyle.

The well-touted 5-4 favourite Lope Y Fernandez moved towards the front racing inside the final two furlongs, but Pinatubo covered the move and quickly asserted his authority — pulling clear to score emphatically by three and a quarter lengths.

Lope Y Fernandez was a clear second ahead of Highland Chief in third.

“He surprised me first time up when he won at Wolverhampton, but learnt plenty. We went to Epsom confident on the back of that and he showed an impressive turn of foot that day.

“I was confident throughout the race today that we were going to get the business done.

“We’ll step up in class now, obviously. Something like the Vintage Stakes (at Goodwood) could be for him, the way he travels. The National Stakes (at the Curragh) wouldn’t be out of the question later.”

Doyle said: “He’s quite a sleepy horse at home and just goes up and down. You wouldn’t notice him in the string.

“He travelled fantastic today. It was just a case of keeping a lid on him for the early part of the race. Obviously his experience at Epsom brought him on a lot. He hit the lids well and I had to hang on to him to save that energy.

“Once we got a bit of room he quickened up well and put the race to bed nicely.

“I can see him getting another furlong, but there are plenty of options for him at seven.”

Aidan O’Brien said of Lope Y Fernandez: “He ran a lovely race. He has only had one run 15 days ago, so you have to be happy with the run really. We were happy with our horse.

“I think the trip looks good and he will stay further in time. I’m not sure we would look at the Superlative. He is only a baby and I’d be thinking we might give him a little more time, but we will see.”