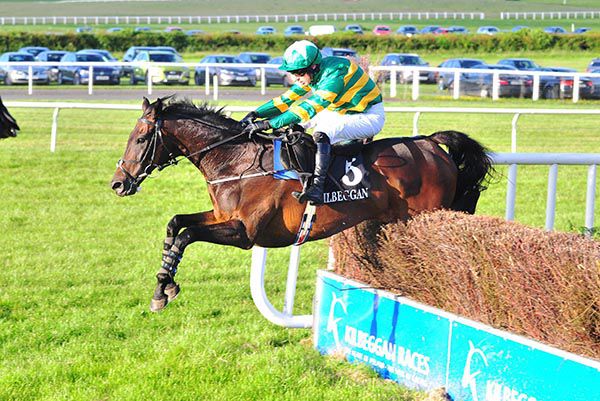 Plinth completed a 120/1 double for Niall Madden, Joseph O'Brien and JP McManus, as he bounced back to his best in the Carmel Fay Memorial Novice Chase.

Last successful in the Grade 3 Grimes Hurdle at Tipperary in 2017, the nine-year-old gelding had been out of form of late, and unseated on his second start over fences at Clonmel earlier this month.

Sent off at 10/1 this evening, the son of Montjeu was settled in second, as the 2/5 favourite Ravenhill attempted to make all.

Briefly in front with a circuit to go, the bay victor regained the lead after two out and kept on well from the last, going on to score comfortably by six lengths.

Ravenhill had no answer once headed after the second last, and had to settle for the runner-up spot under Denis O'Regan for Gordon Elliott.

Frank Berry, racing manager for JP McManus, said afterwards: "He is a great oul horse to have. He wins his race every year and he jumped great tonight. He loved the ground.

"He struggles in the handicaps but has been lucky in the conditions' hurdles and it was lovely to come here and win. He'll tip away at these small tracks and maybe he'll end up at Galway but at a level.

"Carmel (Fay) was my sister and died six years ago so it was lovely to win this race. We won it two years ago as well and the boss man will be delighted." Brahma Bull the odds-on favourite in early shows, was a late withdrawal due to the quick ground conditions.

Madden, O'Brien and McManus were earlier on the mark with Miami Beach (10/1) in the opener.