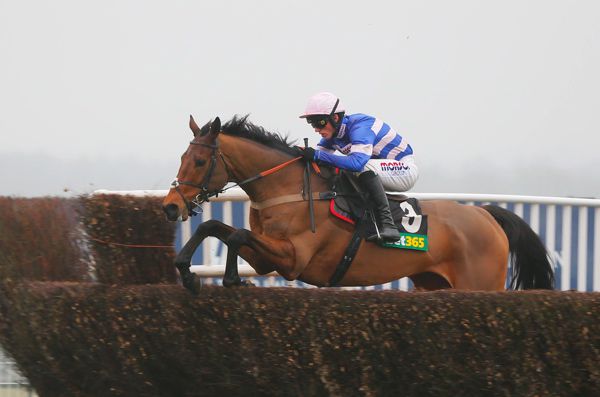 Cyrname produced a tremendous front-running display for a wide-margin victory in the Betfair Ascot Chase.

A field of six runners went to post for the Grade One feature — with Cyrname one of two runners for Paul Nicholls, along with Politologue.

Harry Cobden — bidding for a big-race double, having earlier steered Clan Des Obeaux to an impressive victory in the Denman Chase — sent 3-1 shot Cyrname straight to the lead, and it was clear some way from home that he had his rivals on the stretch.

Having unseated Brian Hughes after almost being brought down on his reappearance in the King George VI Chase at Kempton on Boxing Day, Ruth Jefferson’s stable star Waiting Patiently was the 11-8 favourite to claim this prize for the second year in succession.

However, he was being niggled along racing down the back straight — and while he responded to pressure to move into second at the top of the home straight, Cyrname was away and gone — powering clear to win by a jaw-dropping 17 lengths.

A tired Waiting Patiently clung on for second ahead of Fox Norton in third, and Politologue fourth.

The winner has shown a marked preference for right-handed courses, and Nicholls indicated he is highly likely to resist any temptation to supplement him for the Ryanair Chase at Cheltenham.

He will instead focus this spring on the Punchestown Gold Cup, a test of Cyrname’s stamina with a view to next season’s King George VI Chase.

He said: “That will be his target next season, the King George, because that is what Harry (Cobden) said.

“If we go anywhere (this season), I suspect we will go for the Punchestown Gold Cup.

“He is better going right-handed. You can go around the inner and save loads on him, so Punchestown would suit him very well.

“I’m sure he will get three miles, the way he stays this trip here. If we are going to try and win a King George next season he has got to get three miles, so I suspect we will give him a nice break and go three miles to Punchestown. ”

Cyrname finished a seven-length fourth of five finishers on his last left-handed foray over fences, in Aintree’s Manifesto Novice Chase.

Nicholls added: “Aintree last year, he jumped out right, and those type of tracks don’t suit him.

“At least we will see if he gets three miles round Punchestown. It will be brilliant for him, because it is a big galloping track with proper fences.

“One day, we will go back left-handed.”

The trainer was unable to choose between Politologue and Cyrname before the race.

Afterwards, he said: “Today was the target — and everybody said to me ‘what do you think of the two?’.

“I had no idea he would improve like he has done. It is an astonishing improvement.

“Harry has had a plan all week — and he has executed it brilliantly. He gave him a brilliant ride.

“Last October, he ran terribly at Chepstow. But I always said he was good, and I said to (owner) Johnny (de la Hey) ‘one day I will make him a 150 chaser for you’.

“This season, he has just switched off and he has got confidence in us and is just a different horse.”

Jefferson also gave due credit to the winner, adding she believes conditions played their part in Waiting Patiently’s defeat.

“He has been beaten by a better horse on the day,” she said.

“My instant reaction is he is probably a better horse on soft ground. That’s the quickest conditions he has run on since Kempton.

“He came to win his race, but he just got beat by a better horse on the day. We will just see where it rains next.”

Politologue’s owner John Hales is beginning to wonder if the grey may have a wind issue, and admits a Cheltenham Festival bid is on the back-burner this year.

“He seems to have lost a touch of his speed,” he said.

“We will have his breathing checked out. We will have the vets look at him, but he didn’t accelerate round the last bend like he usually does.

“It’s the first time he has been beaten here. I think it probably makes Cheltenham a non-starter.

“If it is only a soft palate that he needs done, there is time for that and Aintree.”