Punchestown Grade One next stop for Derrinross 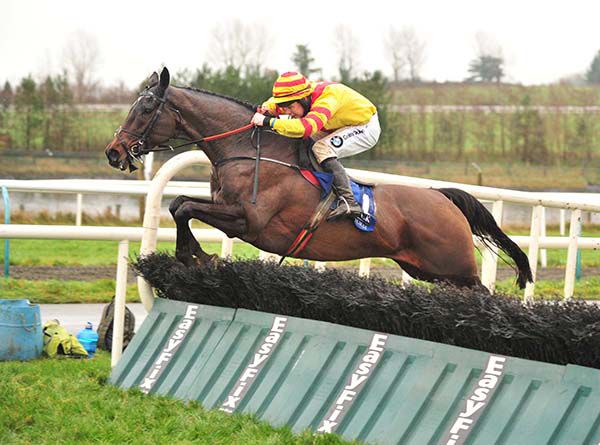 Derrinross is on course for the Irish Daily Mirror Novice Hurdle at the Punchestown Festival.

Philip Dempsey’s charge finished a respectable sixth in the Albert Bartlett at Cheltenham last month and will get one more shot at Grade One glory over timber before embarking on a novice-chasing campaign next season.

The Scorpion gelding thrived on softer ground before the turn of the year — enjoying Graded victories at Cork and Limerick in December — and Dempsey is hoping for a wet couple of weeks before the end-of-season Festival in County Kildare.

“He came out of Cheltenham very well, and we’ve been delighted with him,” said the trainer.

“I hope it keeps raining now, and we’ll go to Punchestown for the three-mile Grade One novice (hurdle).

“There were no excuses really at Cheltenham, and maybe he’s just not up to that level. The others quickened, and he didn’t, but he galloped to the line and stayed going.”

Dempsey was pleased to see Derrinross put in his best round of jumping to date.

“For some reason, they didn’t seem to go very fast in the race,” he said.

“He jumped brilliantly there, though — and that was an improvement, because he had been a bit ragged at Limerick over Christmas.

“I hope he’ll do well over fences next year. That’s the plan, all being well.”